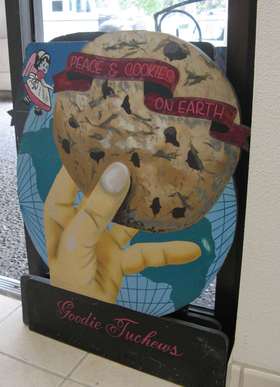 It’s shocking to hear that some of you are not into sweets!  A box of expensive chocolate truffles holds no fascination and luscious cakes aren’t your Achilles’ heel.  You don’t wait breathlessly for all those candy-laden holidays – Valentine’s Day, Easter, Halloween, or Christmas – to be swept away into a sugar coma.   However, on the rare occasion when your sweet tooth is itching to be scratched, you know where to go.  A nearly closet-sized and (yes) hole-in-the-wall cookie shop.  A place – special above all others – called Goodie Tuchews.

It’s amazing – nay, stunning – that longtime downtown residents and workers say they’ve never noticed the cookie heaven that used to reside at 1006 – 10th Street.Well, you can’t blame them entirely. It was hardly one of those cookie-cutter (pardon the pun) establishments with chic storefronts and sophisticated décors.  The corner of 10th & J streets was no garden spot.  Most people hurry past the narrow shops coming and going from J to K streets.  With the opening of the new boutique Citizen Hotel and upscale retail in the street-level shops this is all about to change, along with the closing of the landmark Goodie Tuchews.

Okay, stop gasping for air. Yes, Goodie Tuchews is no more. But have no fear! She has relocated to a shiny new location at 1015 L Street !  Those who love and support Goodie Tuchews feared she would be forced from her shop of 25+ years…and they were right. However, what started out as a moment of anguish has turned into a phenomenal opportunity for Terry and cookie-philes everywhere.

The road to the L Street location has been bumpy. Most of Goodie Tuchews’ clientele in the old Cal Western Insurance building were vacated over the past three years.  This loss of customer base cost her nearly 40-50% of her business.  “I was hanging on by my bitten-down fingernails,” she said about some of her worried days. “All of my customers said, ‘We’ll still come.’ But it’s a convenience thing – they didn’t come. And with all the construction, many people thought I was closed.”

At first the building owners told her she didn’t have to leave and “had nothing to worry about.”  Terry never saw them again.  She realized there was plenty to worry about when building owners finally said they weren’t extending her lease option. “This is not a hobby! I’m supporting my family! But we were nobody to these people!” Soon after, the city and the Downtown Sacramento Partnership got involved.  They provided assistance with relocation funds “and things just started happening.”  She found the new location on L Street and closed the 10th Street store on March 9…the end of an era…she was back in business in early May 2007.

Terry’s love affair with cookies pre-dates Goodie Tuchews’ 1981 opening.  For five years she honed her cookie skills as a regional manager for Cookie Magoo, a Berkeley cookie chain (which eventually succumbed to the wilds of Mrs. Fields.)  Terry had a short-lived break on the road to cookie connoisseur when she went to “live” in Europe . Three months later she was back in Sacramento working at the family-run Goodie Tuchews.

Terry’s dad came up with the 10th Street location. Though lackluster, the rent was cheap. And the name?  Just a fun play on words, Goodie Tuchews, it was somehow fated.  They found out after the fact that people use to call the Cal Western building the “Goodie Two Shoes Building ” because it housed so many non- profits.  Terry, along with her father, Gerald, and six siblings crafted their cookies.  Six Cookie Magoo recipes (Terry was granted these as long as she stayed out of the Bay Area) evolved into 19 and a local cookie legend was born.  Eventually the other family members left the business and Terry became the cookie maven in 1994.

In more than 25 years at the 10th Street shop, Terry has baked thousands and thousands of cookies. (Her largest order to-date was 300 dozen!)  About relocating she said, “Everything happens for a reason. The new space is luxurious and a better location.”  Though she’s joined the ranks of prettier storefronts, her cookies will never be cookie-cutter.  Each one is made with love.  The most popular cookie is always the semi-sweet, chocolate chip without nuts. The only cookie to ever be retired was the gingersnap – due to lack of interest.  And rumor has it that the chocolate cookie with peanut butter chips is a real “adult cookie”…try it with red wine.  For something truly special, ask for a custom-made ice cream sandwich – vanilla ice cream squeezed between two of your favorite cookies.

The new store is still closet-sized. But the interior is bright and sunny; a huge step-up from the old 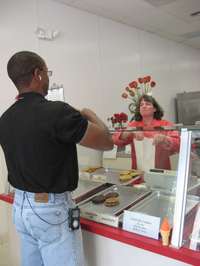 location. You can’t beat the upgrades! Central AC is a big bonus!! Just ask Terry.  And the view of Capitol Park is a major improvement over the vacant storefronts and Rodney’s liquors at 10 & J streets.  Yes, things are definitely looking up in the cookie kingdom.

Chocolate chip, oatmeal, peanut butter, snickerdoodles….  “People said, ‘We thought you’d never make it!’ I never imagined after 25 years that I’d still be doing this. I made myself a job that I love. My motto has always been, Peace & Cookies on Earth!”