It Never Rains in California 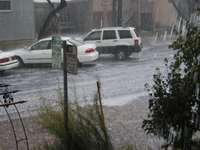 Years of plentiful rain are sometimes few and far between. Water Conservation is a must! Originally posted January 29, 2008, California is in the midst of a water famine the likes of which we have never seen. Water conservation is imperative and not just in famine years. Water is the source of all life. Conserve at every opportunity and understand that it's a precious resource.

I want to meet the person, or persons, who coined that phrase -- in song or otherwise. Californians have come to understand that our weather -- if you can call it that -- is either feast or famine.  The warm months -- of which there are many -- are almost entirely the feasting months. Long, lovely springs and even longer summers -- how much sunshine can you stand?  But where the famine comes in is generated by our unstable winters when we (supposedly) get all of our rain and snow.

Weather forecasters drone on and one about the "normal" precipitation. Comparing this year's totals to last year's totals, and historically to totals dating back to the dawn of total-taking time. I don't know what defines a normal year in California. Every year is different. Hence, the feast or famine of our winters. With rain and cold comes the snow. Some years it rains, but if temps are warm...well, you get the picture...and we've had famous years of Pineapple Express when warm weather melted tons of seasonal snow and flooded everything in valleys below. Last year was a famine year. Little rain. Little snow. The fear, of course, is that it was a trend and the start of a series of drought years. I moved to California in the '70s in the middle of a serious drought. There hasn't been anything like it since, but it's only a matter of time. It's just nature.

When this year's rainy season began, it wasn't looking good. And ski resorts who pray for early snows to coincide with the Thanksgiving holiday and the official start of the ski season...well, this year they were sorely disappointed. Though it was cold enough to make snow, the powers-that-be weren't bringing forth the real stuff from the skies. And there was no rain to speak of in the remainder of the state. Things weren't looking good -- another famine year.

Well, that was then and this is now. We went from way below normal to off-the-charts above normal in the rain category. And the snow...well it just keeps on coming. And it's cold...so cold that the snow levels have dropped well-below normal. And that, my friends, was the reason for this rambling. The snow was so low (how low was it?) that we decided to hop in the Subaru to see. No big deal getting away from the city. Heading up the road into the rolling Gold Country foothills past turn-offs for historic towns like Jackson, Amador City, and Sutter Creek. We skirted through the tiny town of Plymouth and found one of those quiet back roads that we love -- Shake Ridge Road -- even sounds nice. And eventually we started to see what we had come to find...white, shimmering snow. And unbelievably below the 2, 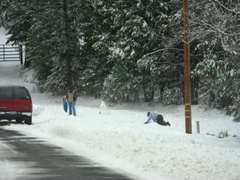 And we weren't alone in our quest. We found families building snowmen and playing with their saucers. Cars having returned from higher elevations were pulled 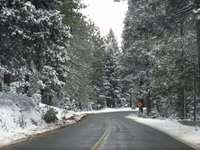 off the road removing their snow chains.  but mostly we found quiet. Cold, white, quiet. We easily reach Hwy. 88 just below the chain-up area. Other then the cars along the roadside, we hadn't passed another car. Shake Ridge ends at Hwy. 88 where we find skiers returning from the mountains -- Kirkwood, Heavenly, Hope Valley, but we weren't about to join them. We easily turned the Subaru around and headed back down Shake Ridge Road. It was like seeing it all for the first time.