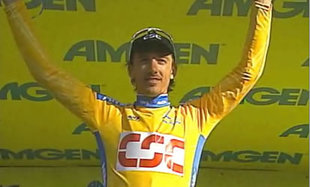 Well, the big day finally arrived and the Amgen Tour of California 2008 -- year three -- is underway. Wandering around the streets of Palo Alto, it was as if the entire city and region was under the rule of Amgen. Staff cars and IDs were everywhere. The celebrity cyclists in their colorful gear were a sight to behold. Sleek. Speedy. I'm still adjusting to the whole cycling culture. It's fantastic.

Long before the actual start of today's Prologue, we were down the road to Santa Rosa, our next destination. We missed all the excitement of today's event but I can imagine the frenzy of the fans who come out in support of the race. I do miss the clanging of the cow bells.

So now I am entrenched in my hotel, awaiting the arrival of tomorrow's support team - mechanics, masseuses, Soignier -- all that the cyclists need to make a smooth transition from race to relaxation.

As for today, Fabian Cancellara of Team CSC (two-time World Time Trial Champion) won the 2.1-mile Prologue in a powerful 3:51:211. Team CSC will defend the leader's jersey tomorrow in Stage 1 from Sausalito to Santa Rosa. Stage 1 will cover more of California's incredible scenic highways along the coast through Bodega Bay up over heart-stopping Coleman Valley Road down into the village of Occidental and then on to Santa Rosa and three fast circuits around the downtown before a raving throng of appreciative fans.

And while visitors and locals enjoy another thrilling race, we'll be on our way to Sacramento for the next day's festivities.