« California: The Journey to the Center of the World | Main | California Wildflower Hike Sutter Buttes »

California: Departing San Diego for the Center of the World

Once I got my rental car on the road, I was glad the Interstate was so quickly accessible. Traffic was heavy, but I kept my eyes on the eastern horizon with dreams of open spaces. The urban landscape quickly gave way to more rural environments. And slowly...slowly...the beaches and flat of San Diego began to climb to hills and valleys of places like Alpine and the Cleveland National Forest. It's amazing how quickly the topography changes...and amazingly different. Because I was behind the wheel and there was a bit of a wind, I couldn't really let my eyes wander too much.  This is when I wish for companions to share the load of driving.

But then I began to see wildflowers....ohhhh, I wanted to pull over and stop but Felicity was waiting -- the Official Center of the World is waiting. I was looking  for exits that I'd want to access on my return journey, but other then that I just stayed on course.

The hills were green; then rocky and more the appearance of high desert. And suddenly there are dunes and then boulders and rock towers -- rock jocks would love this place. Again, hard to imagine that San Diego beaches are less than one hundred miles away.  I did take one detour looking for food and found myself in Jacumba -- a stop on my return trip at Jacumba Hot Springs -- and wonderful Old Highway 80.

I so desperately wanted to drive the quiet back roads, but I knew this would delay my arrival at Felicity. So these wonderful "country" roads will be my reward on the way back.

I am serious about driving and have driven many, many miles on my own. But this trip -- less than 175 miles one way -- seemed endless. Perhaps my anticipation of the long-awaited Center of the World.

Now you may be asking yourself, "How did anyone decide that Felicity, California is the "official' Center of the World?" I can't say with certainty, but here's the short version. An interesting Frenchman, Jacques-Andre Istel, acquired the lands currently known as the town of Felicity -- the name honors his wife, Felicia. In 1985, Monsieur Istel wrote a children's book, "Coe, the Good Dragon at the Center of the World," which places the world's center at Felicity.  This was officially recognized by the Imperial County Board of Supervisors and, in 1989, the law was recognized by the Institut Geographique National of the Government of France. Sounds pretty official to me. Besides, it's such a lovely story...why not have the Center of the World in California?

Suddenly, when I think I just can't take one more mile...off in the distance I see it!! The Hill of Prayer! I don't know how many miles away, but the desert is so flat there was no mistaking the image. "OMG!" I gasped to my lone self, "There it is!" And 18 years of waiting have come to fruition. 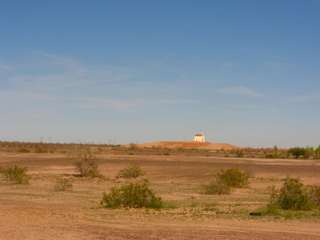 But more adventures were still ahead.