Groveland California: Service Is More Than A Little Thing

Remember when gas stations were called "service" stations?  If so, we know a little something about your age bracket(-;!  Back in those days it really was all about the service and a smile. There was no such thing as self-serve gas. In fact, I'm guessing they service station employees would probably have wrestled the pump from your hands had you tried such an insane thing as pumping your own gas.

In the days of service, they washed your windshield and asked if you wanted your oil checked. Sigh. Those were the days when you could "trust your car to the many who wears the star." 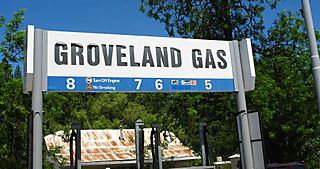 Well, those days still exist in some small towns like Groveland, California. A gateway to Yosemite, Groveland has been around since the Gold Rush. Just a few blocks long and wagon-high sidewalks. Wonderful historic places like the Iron Door Saloon (California's oldest continuously operated bar) and the Groveland Hotel who (likewise) has been greeting guests since the Gold Rush days. And like all of that incredible history Groveland also has one more blast from the past...a real live service station: Vern's Groveland Gas Station.

On my way from visiting the comforts of Groveland and the wilds of Yosemite National Park, I pulled into the very diminutive Vern's. None of that fancy state-of-the-art stuff. No pay at the pump. Just an honest-to-goodness service station. I didn't know when I pulled in. I got out and was heading inside when a young man appeared. "I'll pump your gas," he said. "We don't have self-serve here."

I couldn't believe my ears. "What?" I asked. "Why?" looking a gift horse in the mouth. Imagine...service without having to ask! 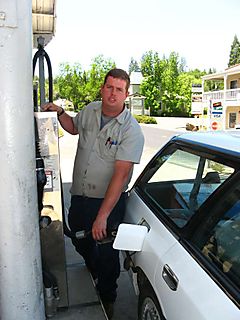 The reason doesn't matter. What he answered was, "The station's been full-service since the current owner, Vern, took over in 1987."  My young service attendant, Tim, has worked at the station since 1996.  With pump running, he proceeded to clean my windshield. I hadn't even asked. Real service folks, I'm not fooling.

With my tank full I was ready to head down the road to Sacramento -- spirits renewed that there really are lots of little things out there that count. It made the spiraling fuel cost a lot easier to swallow.

BTW - If you're looking for a change in lifestyle and the idea of living on the edge of Yosemite appeals to you, Vern is looking to retire. Yes, that's right...Vern's Groveland Gas Station is for sale. I only hope that the new owners -- if and when they ever appear -- will see the value in a little old-fashioned service.