Sacramento Hummer It Really Is the Little Things by Barbara L. Steinberg©

I couldn't be happier to see the first real rain of the season in Sacramento. California's landscape is thirsty and the sight and sound of rain is welcome. Along with this joyful change in the weather, I was greeted by the song of a hummingbird outside my kitchen door. Not at all unusual, I looked to see where the tiny visitor might be hovering. To my delight, he was perched on the phone line enjoying what can only be described as a hummingbird bath. Over and over, he shook his wings, spread his feathers, tucked his head here and there...clearly a joyful moment...for us both. He was so engaged in this bathing ritual that I had enough time to run upstairs, grab my camera, and return. Not the best video in the dim light of evening, but you can see this Sacramento hummer is having the time of his life. We were both humming a happy tune.

This nature interlude reminds me, again, that even in our urban settings wildlife is all around us.

On the Road to Reno with Swiss October 2008

Swiss has been get around really well since breaking his hip more than a year ago. For the most part, however, he's housebound and not able to enjoy one his great loves...traveling. After some thought, we put together a bit of a roadtrip to take him into the Sierra Nevada -- a place he dearly loves -- to enjoy a little of the fall color change, spend time with some good friends, and enjoy the company of family who live in Reno. It was a perfet plan. We enjoyed a wonderful drive, great views, lots of wonderful food, and an unexpected loop around and down Hwy 395 back to Sacramento. Here are some of the photographic results.

On a recent visit to Santa Rosa, we were treated to a most interesting feat, feast, and a fête of sorts. The building...assemblage...of what was touted as the world's biggest BLT. Yes, that's right. The most delightful and homespun of all sandwiches...the bacon, lettuce, and tomato. Well, it wasn't quiet the largest but a healthy 56 feet and enough to feed 200 people. The largest was actually created in 2003 at

the Kendall Jackson Tomato Festival -- it was a whopping 106-feet-long and 15,000 square inches.  We can thank Michele Anna Jordan, High Empress of BlT, for this most recent foray into the world of the perfect BLT.

But not just any BLT. A locavore BLT. All parts -- including the labor -- made from local goods. Organic freshly-picked salad greens. Heirloom tomatoes -- beef steak, also fresh-picked that day. Lovingly cured bacon from Black Pig Meat Company by Owner/Chef John Stewart of Zazu Restaurant in Santa Rosa.  Naturally raised, hormone-free and smoked over apple wood -- pigs may not fly but this bacon is above the clouds.  And the bread...Oh! My! God! the bread. Eight-foot loaves of the most beautiful ciabatta bread from Costeaux French Bakery (ca 1923) in Healdsburg, an award-winner at the Sonoma County Fair. My head was spinning.  And absolutely...NONE, NO WAY do I want to see Miracle Whip. The Mayo Queen was on hand to curse anyone who might suggest such blasphemy.

The BLT is one of those wonderful childhood memories...something that when I say, "don't mess with perfection" I mean what I say. I am a snob when it comes to my BLTs. Are the tomatoes fresh? Is the bacon crisp?  And how much of this most important ingredient will you spare?  I just hate a skimpy BLT...do not skimp on the B!

View the Big Beautifulness of the BLT! And the photos!

And sometimes not so little. I was whining about having to leave my little corner of paradise in an oceanfront room at the Four Seasons Resort the Biltmore Hotel in Santa Barbara. Jump in the rental car and fight my way downstream to the Hollywood Burbank 'Bob Hope' Airport after the calm of staring at the ocean. OMG! Back in the flow of traffic and taking what seems to be forever to drive all of 88 miles I arrived at the Enterprise rental car lot only slightly frazzled. Searching to make certain every last item was retrieved from my midget Chevy and stuffing things into bags every which way.  I was way too early for my 2:50 p.m. flight, but I didn’t want to pay for another day of rental plus you just never want to take chances with the SoCal traffic. It's a much better idea to allow too much time, hang-out in the airport for a while, and imagine myself back in Santa Barbara.

So, I’m sitting at my Southwest gate. Three men move into the seats directly across from me.  An elderly gentleman in a wheelchair, a guy in baseball cap sporting a capital “B”, and a guy in cool bowling shirt.  I was really focused on the bowling shirt – I love that style.  I kept glancing up. The man with the

“B” hat was in the middle.  Finally I began to focus on him. He was casually attired in a white shirt, gray pants, and nicely-worn white tennis shoes. I don’t know how many times I looked into his calm, tanned face before I thought, “Hmmm, he looks really familiar!” I thought I heard the word, ‘Hollywood’ and then I found myself straining to hear more. I didn’t want to approach without being sure – and the sound of his voice was so distinctive. Then I think I’m pretty sure. I didn’t want to be one of those looky-loos, some goofy celebrity hound.  Then, the guy in the ultimately cool bowling shirt got up and I saw my chance.

I got up, moved across the floor, sat down and nervously said, “Are you…?” And he finished my sentence, “Johnny Mathis? Yes, I am.”  I immediately apologized for intruding. Told him the sad story of having to leave beautiful Santa Barbara, but this was the end of my travel rainbow and the reason why the powers that be had me leaving early. This one little encounter left me smiling and giddy; though I must admit I felt so awkward.  Naturally, the camera kept malfunctioning in my attempts to have one of his people take our photo.  Oh, god, he must be asking himself when this will all be over.  Eventually I had to give up and snapped a solo photo of him.  Natch it was too dark.  Finally I got the flash to work and got a reasonable photo of 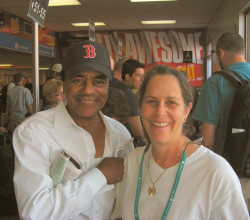 him alone – profile – not what I had hoped for but I’ll take what I can get.

Eventually the group’s flight to Las Vegas was called to board. Johnny was heading for a two-night gig at the Hilton.  And what an average thing to do, but for JM and his friends to line-up along with the rest of the Southwest crowd. He was right in front of me under the 51-55/56-60 line  And then he turned and said, “Is the camera working now? Let’s try again!”

Score! One more little thing..the word AWESOME says it all! 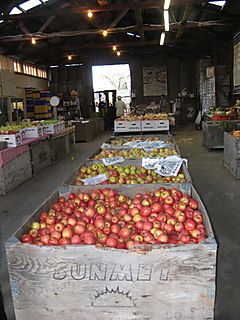 I really took it to heart when learning about the whole "farm to table" philosophy, which promotes buying produce that's been grown within 100 miles of home.  Let me tell you something...it's tough.  But I try. And failing that, I tell myself, "It must at least have been grown in California." When that doesn't work...at the very least, it should be grown in the U.S.  How hard could that be?

Well, sometimes really, really hard. Why? Because labeling is so misleading and even with produce you to read the fine print.  Haas California avocados are a great example. You see them everywhere.  But many times, those buttery fruits are grown in Chile.  When the California avocado crops were damaged by the fires, the Chilean avocados were in the markets for many more months. Much as I love my guacamole and avocado salads, I resisted the urge and did not purchase a single avocado until I was certain it came from California soil.

Similarly, I found a bag of Gilroy garlic at a local store – proudly labeled as California grown. Happy stinking roses! At home, preparing dinner, there in very tiny, tiny print on the bottom of the bag it said, “Product of Argentina.” Those beautiful bulbs went back in the bag and back to the store. As strange as it sounds, now I even ask at the farmers markets, “Was this grown in California?”

Then I took the whole “act locally” to the next level. Our local merchants need us desperately! Yes, I do shop at Costco sometimes. And occasionally succumb to the wilds of Home Depot. However, I am trying (what we must do) to support small, local businesses; especially during these most difficult economic times.

With the rising cost of gas, it really isn’t cheaper to make that drive to the big “Box Store” to save a few bucks. Plus, I am walking more!  That's a bonus!

Residents and visitors to the Golden State,

There are great farm, wine, and harvest trails throughout the state.