The Celebrity Eagles Have Landed!  by Barbara L. Steinberg©

Today's technology is allowing our prying eyes into the lives of two magnificent American bald eagles in Redding, California. You will find yourself being drawn into their lives.

Patriot & Liberty, celeb eagles, arrived on the scene in fall of 2004. Young and possibly newly wedded, the pair of proud eagles didn't produce any eaglets for two years. And pre-eagle cam, no one can say for certain if they produced any eggs.The eagles have returned to their nest each year, continuing to expand their stick condo to an unbelievable size!

The pair arrives each fall and eggs begin to appear in early February. The first successful eaglet birth was in 2007. This was followed by two eaglets in 2008. For 2009....drum roll...there are three eggs in the nest. One or two is normal; three is unusual. It would be rare for all three to survive, but it does happen. Unfortunately, the last to hatch will have to compete with two older, larger siblings and will clearly be at a disadvantage. Survival also depends on available food sources.

The nest is in a Fremont Cottonwood tree..."about 100 feet off the ground," said Craig Martz, California Department of Fish & Game. According to Craig, the incubation period is about 30-35 days. From hatch to fully-feathered and learning to fly is about 12-14 weeks. The eggs were laid: Feb. 6, Feb. 9, and Feb, 13. With any luck, we will see our first eaglet the second week of March...or sometime thereafter. Once the eaglets have...yes, flown the coop...the parents will hang around for few weeks before departing on a much needed vacation. Short and sweet...they'll return in October when the cycle of life begins again.Who's planning the bird shower?

A stroke of luck that Caltrans road construction was the reason for the eagle cam installation. What a thrill to intrude on the lives of two such beautiful creatures. And to think at one time -- the proud symbol of our Nation -- was on the brink of extinction. To watch these loving parents come and go -- carefully tending to their soon to be born brood -- is a privilege; an honor; and a gift to be treasured. Thank you to all involved for bringing our wildlife heritage into my home. Stay tuned for birthing news.  by Barbara L. Steinberg©

BTW - The California Travel Insider would like to thank her friend and Redding resident, Bonnie Sharp, for this unbelievable inside tip. That's what friends are for! 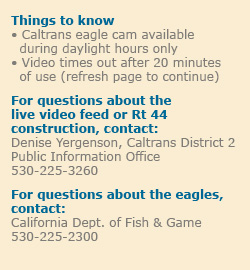 What's happening in the eagle nest?

The eagles have now laid three eggs. One on February 6th, the second on February 9th and the third on February 13th. All the eggs were laid in the early evening. The eagles will take turns incubating until the eggs hatch after about 35 days.

Pay attention when the eagles switch places during incubation. Their talons are very sharp and can easily damage the egg shell, so they carefully ball up their feet when they sit down on the egg.

• Although eagles have been removed from the Endangered Species List, bald eagles are still protected under the Migratory Bird Treaty Act and the Bald and Golden Eagle Protection Act.

• There are 59 eagle species found throughout the world! 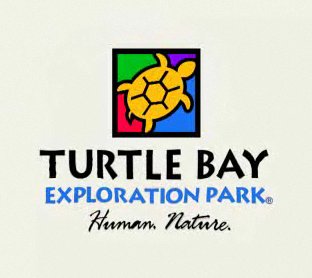