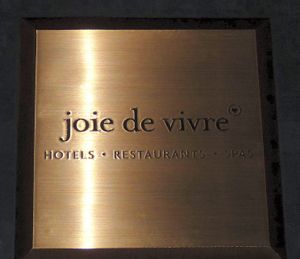 Sacramento's historic 1925 Cal-Western Life building has a new life and a new glow as the Citizen Hotel, the latest in the Joie de Vivre Hotels hoteldom. Known locally as the J Building (located at 926 J Street), the Beaux Arts Citizen was painstakingly restored, remade, and reinvented as Downtown Sacramento California's first and long-awaited luxury, boutique hotel. After much anticipation and a few weeks of a soft opening, the Citizen Hotel made its debut...a debutante ball as such...on February 26. A regular red carpet event...the spotlights lit up a the sky and even Marilyn and Groucho look-alikes were there to greet the throng of A-list guests.

spaces in between, the Citizen was buzzing with excitement. Enormous flower displays and pink-hued crystals adorned tables of jumbo shrimp, cracked crab, oysters on the half shell, crab salad, and ceviche -- a temple of seafood delights. Wine fountains flowed and music filled the air. The balcony of Mezzanine lounge Scandal was jazzed and jumping. The 7th-floor tented rooftop terrace delivered more musical vibes and capital views...literally...the Capitol a jewel in the night sky.

It was exhilarating to say the least. JDV and their partners have done Sacramento proud. If you haven't been. Go! Stay! Eat! Enjoy!