« Santa Catalina Island: So many reasons to visit | Main | There's nothing more wonderful then ice cream sandwiches in summer »

Yosemite's GreenPath is Getting Greener

Visitors to Yosemite National Park should get ready to experience the best side of green with the debut of the Park's totally earth-friendly Habitat store and some very green lodging options.

With products ranging from tee shirts made from recycled plastic bottles and children's games made of soy, to organic snacks and solar powered water bottles that double as flashlights, the new Habitat store offers a range of affordable gifts, clothing and outdoor gear in a completely eco-friendly retail environment.

Operated by Delaware North Companies Parks & Resorts at Yosemite, Inc., Habitat exemplifies the company's award-winning GreenPath® environmental stewardship program. Its 1,000-square-foot interior is a floor-to-ceiling exhibit of green interior design and retailing. Habitat's display fixtures are made from recycled items that have been used within Delaware North Companies Parks & Resort at Yosemite's operations. 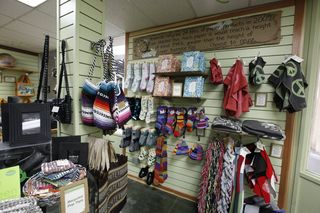 Throughout Habitat shoppers will find educational signage focusing on Yosemite's environmental stewardship projects, and impressive statistics about waste diversion, energy savings and water usage. A selection of phrases can be found throughout the store, such as "Yosemite recycled 28 tons of plastic in 2009. If you laid the bottles end-to-end they would equal 111 miles or the distance of over seven round trips from Yosemite Valley to Half Dome."

If this isn't enough green for you, the Yosemite Lodge at the Falls just unveiled two prototype guest rooms on the cutting edge of environmentally-friendly interior architecture and design. The two rooms at The Lodge are the first of their kind in Yosemite National Park.

The eco-friendly guest rooms were designed with an eye toward an eventual roll-out throughout the Lodge's 245 rooms. The prototypes offer an opportunity for Delaware North Companies and the National Park Service to evaluate the success of the overall design and gather guest feedback from those who stay in the rooms. An additional goal is the eventual certification of Yosemite Lodge at the Falls as a LEED (Leadership in Energy and Environmental Design) and Energy Star property.

The "green" rooms are elegant...warm and welcoming. Here's a little something about all that's environmentally-kind on the inside:

A new electronic key card entry system integrates with the room's energy controls, using a lock that requires 50% fewer batteries than older locks, with the batteries lasting for nearly four years. After unlocking the room, the guest places the key card in a wall slot just inside the door. With a faint click, the key card activates select circuits that power lighting and electronics. When the guest removes the key from the slot upon leaving, the room reverts to its unoccupied, energy-saver state, automatically reducing the demand for power to circuits that feed the television and accessory lights.

The American-made, 100% organic cotton sheets were produced in a solar-powered factory in Rhode Island. The bed's blanket cover, throw and window drapery are made from washable cotton matelasse.

With fibers produced in part from recycled plastic bottles and a backing derived from old tires, the carpet tiles in the guest rooms add warmth and comfort underfoot with a small carbon footprint. 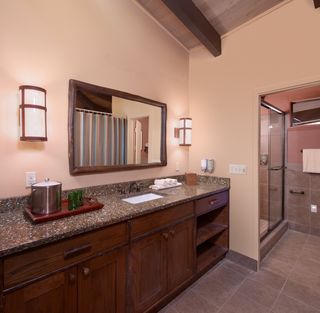 Produced just outside San Francisco, the countertop is made of 85% glass collected from curbside recycling bins. This striking surface alerts guests that there's something different and special about their room, especially when paired with drinking glasses made from wine bottles.

Richard Kollath designed a line of Old Hickory furnishings unique to the green rooms at Yosemite Lodge at the Falls featuring distinctive, inset bow tie joinery. Like other Old Hickory furnishings and accessories in the Yosemite Valley, this rustic, durable collection is made using mid-western hickory saplings - the hardest wood in North America (30% harder than oak) and a renewable source that continually re-sprouts from the same stump.

The new shower and bath fixtures in the Yosemite Lodge prototype rooms are high-performing, water-efficient models that will save nearly 5,000 gallons of water each year, using just 1.28 gallons per flush.

GreenPath®, which began in Yosemite National Park over a decade ago, has since expanded to Delaware North Companies' 200-plus venues across the world. A sophisticated environmental stewardship program actively engaging employees at every level, GreenPath® ensures environmental considerations are incorporated into all business decisions. The program's initiatives are showcased in comprehensive recycling, composting and other waste-diversion programs, energy and water conservation, employee and guest interpretation and education, sustainable, local and organic food policies, strategic planning and partnerships, product purchasing and fuel consumption. As a result, Delaware North Companies is one of the first hospitality companies in the United States - and the first operating in a national park - to earn 14001 environmental management registration in the International Organization for Standardization (ISO), a worldwide federation of national standards from some 140 countries.

Just as you cannot write fast with your wrong hand, you cannot play good golf if you choose the wrong clubs.