Agritourism is About People Getting Close to the Land

Near Fairfield and just off Interstate 80, the turn-in at Erickson Ranch is almost as obscure as the road that leads you there. The driveway, dirt and gravel, is bordered by orchards and aging farm equipment. The “parking  lot” has no striping, but hay bales act as bumpers. Exiting your vehicle, you are likely to be greeted by a pack of tail-wagging farm dogs – old labs, some terriers, and a cheerful pit bull named Rocky.

Farmers Ray and Victoria Erickson lead a life from days-gone by and one that you may envy. A third-generation farmer, Ray’s known farming his entire life; his grandparents farmed this same land.  After a complete remodel, he and Victoria moved back to the family farm about six years ago.  But to maintain this life on the land they work hard. Really hard! Victoria’s day job is that of a full-time RN. While Ray, spends his days plowing, planting, pruning, and picking. During their agritourism season they are open to the public six days a week!

“The ranch has become more of everything,” said Victoria. “Originally it was just a farm stand.” One thing led to another. The Erickson’s increased their dried fruit production – the most popular item is their Blenheim apricots. Then Victoria started making jams and apple butter and they acquired a chili roaster. They also grow cut flowers, which are popular with local brides who cut their own bouquets. According to Victoria, the number of visitors has increased and the visitor type has changed. “It used to be mostly women who were canning and wanted a variety of fruit,” she said. “Now, we’re getting more families – folks who want to see where food comes from. Lots of people from the Bay Area have discovered us.”

A 2009 survey conducted by the UC Davis Small Farm Program (SPF) showed that many of California’s small farms are reaping the benefits of agritourism. Of the 554 responses (2,000 surveys were mailed), 332 farmers identified themselves as conducting agricultural tourism. “The total number of respondents hosted more than 2.4 million tourists,” said Penny Leff, SPF Agtourism Coordinator. “But this doesn’t account for the farmers who didn’t respond. Clearly there are many more people visiting. The Dell'Osso Pumpkin Maze in Lathrop had 140,000 visitors last year. That’s a huge number!”

According to the survey, farmers are looking to increase revenues from direct sales and/or event fees.  More farms are figuring out how to do weddings – especially wineries – and events in orchards. The survey found that pumpkin patches and corn mazes have become incredibly popular.  Erickson’s has a small pumpkin patch as one of their seasonal offerings.  Not far away in Dixon, Cool Patch Pumpkins’ roadside pumpkin stand has evolved into the “world’s largest corn maze” authenticated by the Guinness World Book of Records.  The combined effort attracts thousands of people each year.

“Wineries are still the most popular part of agritourism,” according to Penny Leff.  “The wineries taught everyone else...set an example...of how to do it." To prove her point, try a visit to Fairfield’s Suisun Valley. Equidistant between Sacramento and San Francisco, just a few years ago there were only two tasting rooms in

the valley. The numbers are multiplying and agritourism is flourishing. Vezér Family Vineyard and Blue Victorian Winery owned by Frank and Liz Vezér are but two of the newcomers. The wineries welcome guests to their tasting rooms and provide a spectacular backdrop for weddings, meetings, and concerts. Both the Blue Victorian and Ledgewood Creek (another Suisun Valley winery) offer guests and groups the rare occasion to enjoy the agricultural setting, a wonderful glass of wine, and a little bocce ball. 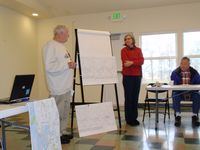 Agritourism is also about education. Rush Ranch Open Space and the Center for Land Based Learning are prime examples. Both offer educational opportunities on the importance of farming and the preservation of the land. Interpretive displays, living history, wagon rides, docent-led hikes, and team building opportunities are closely tied to agritourism programs and bringing guests close to the land. Craig McNamara, owner of Sierra Orchards, founded the Center to educate students about agriculture.  “Educational field days elicit a huge amount interest even with adults to come see the farm,” said Marion Adams, Center for Land Based Learning. “And there’s a huge trend for farm weddings.” Revenues generated from special events help support both nonprofits.

Day-of coordinator Genevieve Roja, owner of Lily Spruce, loves the Center for Land Based Learning. “The facility is gorgeous – the 100-year-old house is and a huge olive tree-lined drive leading up to house. It’s like something from a movie,” she said. “Some clients are more thoughtful andI  encourage them to use as much local produce as possible. Someone who interested in recycling and composting.“ All of this is part of the Center’s philosophy, too. 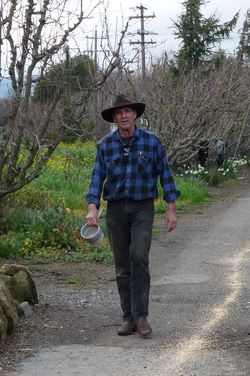 ommunity Supported Agriculture (CSA) is the growing trend for smaller farms according to Penny Leff.  “You become a member and get fresh produce delivered from the farm.” The CSAs have open-house days for members and invite you to the farm and do tours. “It’s a direct connection to fresh food and a place for families to visit,” said Penny.  Eat Well Farms near the Center for Land Based Learning does everything from Summer Solstice to Pumpkin Harvest events for their members.

The “from farm to table” principles are growing and many more people are seeking out local farms and agricultural programs as getaways. Farm and wine trails exist as far south as San Diego County and in Tehama County to the north.

Back at Erickson Ranch, a tall and lanky Ray is the picture-perfect farmer. Torn jeans, mustache, and broad-brimmed hat. “People come here to see Ray,” says Victoria. “They want to talk to the person who does this and Ray loves to share his story.”