Berkeley’s Unique Appeal is About Location and Partnerships!

This SF Bay City is Perfect for Some, but Not for Everyone! by Barbara L. Steinberg 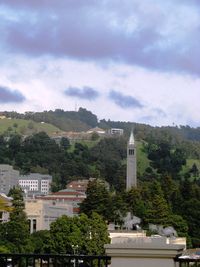 Berkeley, California is recognized as the intelligent place to live. Distinguished as a nucleus for higher education, political controversy, culinary scenes, and renowned for its sustainable practices, and a nuclear-free zone (ca. 1986), Berkeley is always ahead of the curve.

Throughout the years of political unrest and the “make love not war” movement, Berkeley California was on the cusp. Berkeley survived the “flower power” which originated during a major conflict in 1969 when the National Guard was called in to put down “civil disobedience” at the sight of the now famous People’s Park.

Despite its worldwide prominence, Berkeley is often overlooked by groups and meetings, in part, thanks to the celebrity of that other city by the Bay. Without an official convention site and fewer lodging rooms, Berkeley is truly “unconventional” when it comes to meeting and event planning.  In fact, you might say it’s the anti-convention! Berkeley’s meeting alternatives include kitschy and revolutionary arts, culture, culinary, and one-off event venues. Planners overall will discover what they lack in size, they make-up in creativity, pricing, and accessibility.

“Internationally people have a high regard for Berkeley,” says Barbara Hillman, President, Visit Berkeley. “It’s a place where you just feel good. Still, it’s not for everyone!” Berkeley has 1,500 traditional lodging rooms; small compared to other major destinations. However, during the 12-week summer break, the UC campus offers up another 6,000 beds and 57,000 square-feet of meeting space across five resident facilities! The city accommodates groups (large and small) in other unconventional ways including some 21st-century enlightened meeting spaces.

In 2009, the LEED Platinum certified David Brower Center embraced Berkeley’s organic pedigree.  The cutting edge atrium gallery, high-tech theater, executive conference rooms and outdoor terrace are welcoming and feature world-class AV technology and Wi-Fi access throughout! Conveniently there’s a parking structure under the building.  “The venue was founded to be multi-use,” according to event manager, Laurie Brown. “The warmth of the building creates a great place for people to come together.”

Berkeley’s greenest building, all caterers must recycle and compost. Included in Brower’s rental prices are the set-up, breakdown, house manager, AV tech AND tables and chairs!  Nonprofits get a 40% discount off standard rates. 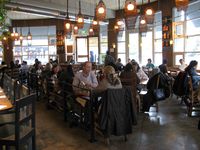 Less than a ½-block away Gather Restaurant, adjacent to the Brower Center, is the newest in a long-line of Berkeley sustainable and accessible shining stars satisfies any diet, including vegan. Chef Sean Baker, Esquire magazine’s 2010 choice for “Chef of the Year”, draws his inspiration from California’s organic and locally-sourced riches.

Gather’s co-owner and CEO, Eric Fenster, operates Back to Earth catering, which caters everything from small, intimate dinners to conferences at the David Brower Center and UC Berkeley.  Since 2002, Back to Earth has provided innovative and sustainable catering services, and received many awards as green events hit the scene.

The partnership between the Brower Center and Back to Earth Catering is a perfect example of how Berkeley continues to be on the front edge of innovation. “Your event venue and food services can be kind to the earth, while your celebration can still be gorgeous and delicious!” says Eric Fenster. “Plus, with the restaurant right next door, that unexpected request can be handled within minutes.” 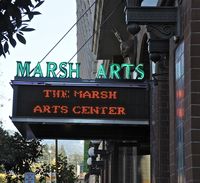 Performing arts venues provide an off-beat angle for creative event planning. The Marsh Arts Center supplies everything from a 91-seat cabaret to 120-seat main theater with nothing less than state-of-the-art AV, incredible lighting, fantastic acoustics and a traditional proscenium. The mezzanine has two additional break-out rooms filled with natural light perfect for groups looking for something more intimate. A wide array of tables, chairs, and catering kitchen are included.

Jack Kuo, Director of Marketing, La Marzocco USA, set-up a mobile showroom to showcase their espresso machines and other coffee equipment. “The location is spacious and more economically viable than San Francisco. The turnout was 500-1000 per day, 2-3 times our expectation; The Marsh helped us to handle it perfectly!”

“Location is why we chose The Marsh.” Helena Weiss-Duman, Director External Relations and Office of Protocol, UC Berkeley confirmed. “Plus, the theater is a blank slate, there are no obstructed views; stage and AV are built in. If you need more space…the Brower Center is right next door; meet at the Brower and have a catered lunch at The Marsh.”  Berkeley is all about creative relationships and cross pollination when planning events.

Berkeley’s original hotel and another Marsh and Brower partner, the 100-year-old Shattuck Plaza has been brought back to life with a multi-million dollar facelift. The 199-room boutique Shattuck has 8,000-square-feet of total meeting space, state-of–the-art audio visual, and complimentary high-speed Internet throughout the hotel—wired and wireless. The in-house FIVE Catering utilizes many locally-produced and sustainable sources for meeting packages and can customize menus to suit dining needs.

Meeting planner, Heather Amen, coordinated a conference for a select group of microbiologists and industry members from around the world.  “The conferees from the universities in San Francisco and Berkeley offered to host this year's conference. We looked at various locations and hotels around San Francisco, and found the Hotel Shattuck to offer all the amentias we needed at a good price, and it is the right distance away from San Francisco.” 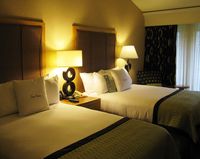 Quirkiness notwithstanding, Berkeley still maintains some conventional wisdom in the form of the DoubleTree by Hilton Berkeley Marina, which underwent a $12 million makeover in 2008. The three-story, low-rise DoubleTree is spread out over four buildings along the waterfront.  The city’s largest hotel has 378 guest rooms and more than 15,000 square-feet of indoor/outdoor meeting spaces popular with associations, educational groups, and sports teams competing at UC Berkeley.

“The teams love that it’s close to the campus, but far enough away to be peaceful,” says DoubleTree sales manager, Tanjeet Bains. “A big draw is the breakfast buffet. They can eat as a team or individually.” Another big plus is that there’s free parking for buses and vans. And if you choose to travel carless, the DoubleTree’s free shuttle provides pick-up and drop-off service within three miles of the property. Teambuilding services and meeting space are also available at OCSC Sailing, a short walk from the hotel. 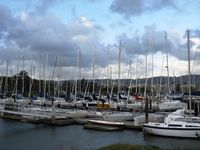 Groups will enjoy the waterfront and park-like atmosphere. “Location, location,” says meeting planner Megan Walton. “It’s a nice property. Just walk out the door and go running along the Bay or enjoy Chavez Park.” The hotel is also an easy walk or short drive to other downtown Berkeley attractions. Recycled from a Marriott to Radisson and now DoubleTree, Megan has worked with different staff, “But over the years everyone has been great,” she says.

UC Berkeley’s Conference Services are a one-stop shop and can act as a liaison to help book campus facilities. “Planning a meeting in UC Berkeley can be daunting, so our staff works very hard to turn that perception around,” says Denise DiBetta, Director of Conference Services.

From May to August, campus doors open wide to greet groups from around the world including youth leadership, associations, campus-related, and education-based programs. It’s all about education!  Accounting Career Awareness Program (ACAP) has utilized the UC’s Clark Kerr Campus for four years.  They came to Berkeley because of the diverse campus life, according to Joy Jacobs, ACAP’s logistics and program manager.

About working with Conference Services staff Joy says, “They are very accommodating. Whatever our needs, they are right there.” ACAP uses double-sleeping rooms for students and singles for staff. But like all things Berkeley, the campus life “isn’t for everybody”. Resident facilities include everything from singles, doubles, triples, and suites, with and without shared bathrooms. BUT…it’s very affordable and their food service is nationally-recognized. 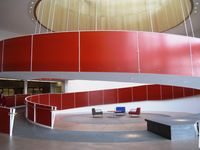 Did we mention the accessible side of Berkeley? The Ed Roberts Campus is universally accessible and provides more than 8,500 square-feet of meeting space, not including the terrace. Executive meeting rooms and atrium are awash in natural lighting.  Wireless throughout, meeting spaces have mounted projectors and assisted listening devices that plug into a hearing aid or headset. The Campus, located above the Ashby BART station, is one convenient stop from downtown Berkeley.

Berkeley offers a selection of smaller hotel options for the budget conscious or if room blocks are sold out.  The Downtown Berkeley Inn and Roadway Inn score high on TripAdvisor and include free on-sight parking. If historic architecture is what you seek, the Julia Morgan-inspired Berkeley City Club has meeting space and is also a Historic Hotels of America.

Just get your wanderlust revved up and in any direction you’ll find hundreds of restaurants, shops, art studios, and theaters.  Downtown districts help define where to shop, dine, and relax:  Arts & Commerce, Fourth Street, Telegraph, Gourmet Ghetto, and Ashby Arts.

The thriving Arts District is centered on Addison Street with incredible offerings including the Berkeley Rep, Aurora Theatre, JazzSchool, and Freight & Salvage. They all have meeting and event space available. Blocks away, Fourth Street is a shopping and dining Mecca. It’s the place to see and be seen. A popular local hang-out, it’s a destination plus for meeting after-hours. Educate your palette at Takara Sake, the largest facility in the U.S. They have meeting space, too! 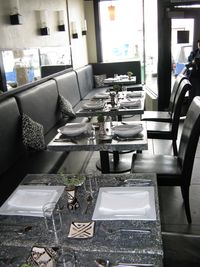 The fad in farm fresh takes a playful approach with “Dirt Dinners” at Eve Restaurant.  A trend-setter in Berkeley’s culinary universe, owner/chefs Chris and Veronica Laramie source from urban gardens. Farm-to-table in six hours! Billed as “Neo-Artisanal California” it is gastronomic fine art. Groups can take over this diminutive dynamo including the patio area.  Also new to Berkeley’s organic dining scene, Revival Bar & Kitchen opened in 2010. A treat anytime, the 45-person private dining room is ideal for meetings and gathering and is “A/V friendly.”

Get Connected:  Most Berkeley meeting websites are well-equipped with essential event-planning information to simplify your decision to choose Berkeley!