Out-of-towners know something about Sacramento’s vintage and secondhand retail scene.  “Some of the best stores,” according to one rabid Bay Area reuse consumer. La Fem Sophistique has raised the bar on Sacramento seconds. 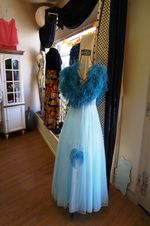 4 is today’s size 8. Owners Sandy and Suzen educate shoppers about preservation and reuse. And now you can shop them online! 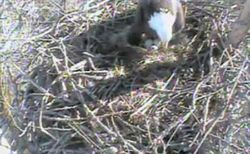 As of February 13, 2013 it was an official three-peat!  Thank you to Turtle Bay staff for providing incredible still shots captured on thevideo cam and bringing this moment to us and providing interpretive information.

Now it's just a wait and see game. As is typical, the first egg laid should be the first to hatch sometime in late March. Then it becomes survival of the fittest. The first triplet eaglets graced this page in 2009 --  Freedom, Hope, and Spirit -- survived against the odds. They fledge triplets again in 2010. Cross all fingers and toes that 2013 will bring us images of that final moment when this next generation of bald eagles heads for the sky.

This is a most special view of Nature at her finest. Check in often.

When it comes to covered bridges, California can brag with the best of them.  "What!?" You thought only 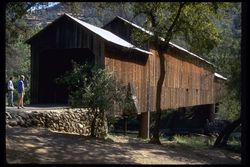 New England claimed ownership of those marvelous portals to the past.  Not true!  What California lacks in quantity, it certainly makes-up for in quality.  Californian's can flaunt the uniqueness of their covered bridges:  the tallest; the only one with three distinct roof lines; the only covered bridge installed backwards and the longest covered bridge.

For many years, Zane's Ranch bridge had the distinction of being the last covered bridge built in the state.  Then in 1967, the Jacoby Creek bridge was built.  Located just six-miles north of Eureka, the bridge leads into the plush Brookwood housing development.  Built primarily for aesthetic reasons, the 68-foot Jacoby Creek is a gentle reminder of by-gone days.  To reach Jacoby Creek, take the Samoa Blvd./ Arcata exit off Hwy. 101.  Turn left and drive 1.3 miles to the bridge.

There are several stories concerning how the Honey Run got its name--including one about a bee's nest in a nearby ridge.  The most humorous story involves a young couple who, while strolling near the bridge were confronted by a bear.  The young man was heard to shout, "Run, Honey! Run!"  And thus, the name.  Contact:  Chico Chamber of Commerce, (800) 852-8570

Not far from Honey Run is a most recent and charming addition to California's covered bridges, the little known Oregon City Covered Bridge.  Built in 1984, Oregon City can claim it as the newest covered bridge in California.  The 50-foot, barn-red bridge welcomes visitors to Oregon City, CA, State Historical Landmark #807.  Travelers to Oregon City are rewarded with panoramic views of the vast Central Valley as they wind their way up and over Table Mountain.  Contact:  Oroville Area Chamber of Commerce, (530) 538-2542 or (800) 655-GOLD.

Built in 1860 with hand-hewn local timber, Oregon Creek (or Freeman's Crossing) is the oldest covered bridge and possibly the oldest bridge of any type in California.  Oregon Creek boldly boasts it is the only covered bridge in the United States installed backwards.  Washed away by a flood, a team of oxen towed it back to a convenient crossing and it was reinstalled backwards.  Oregon Creek is north of Nevada City in Yuba County, off scenic Hwy. 49.  Drive across the bridge and enjoy a picnic or swimming on the other side.  Contact:  Nevada City Chamber of Commerce, (530) 265-2692 or (800) 655-6569.

Eight miles away off Pleasant Valley Rd., north of Grass Valley, is the Bridgeport Covered Bridge, "the longest single-span covered bridge in existence."  Portal to portal it measures 233 feet, but the clear span -- the distance between piers -- is 208 feet.  Constructed in 1862, the shake-covered arch spans the South Yuba River and was part of the Virginia Turnpike Company toll road connecting the Nevada County mines with the Comstock Mines.  It is State Historical Landmark #390. Previously, there was a controversy that the Blendheim Bridge in New York was the longest single-span covered bridge. An official measuring in 1938 concluded that Bridgeport was two-feet shorter then the Old Blenheim Bridge.   The Bridgeport Covered Bridge had the longest roof line. Sadly, the Blenheim Covered Bridge was destroyed in 2011 by Hurricane Irene. So, proudly, Bridgeport can reign supreme.  Contact:  Grass Valley/Nevada County Chamber of Commerce, (530) 273-4667 or (800) 655-4667.

At 355 feet, Knights Ferry is the longest covered bridge in California; the ninth longest in the nation; and the longest authentic covered bridge west of the Mississippi.  The bridge replaced a ferry service established in 1848 by Dr. William Knight.  Built in 1864, the bridge crosses the river at the site of the ruins of the old Locke grist mill.  Not far from the bridge, Native American Indians ground their corn in mortar holes in the rocks.

Weakened by an overweight truck, the bridge was closed to vehicular traffic in 1981.  Restored by the U.S. Army Corps of Engineers, it has been incorporated into the Knights Ferry Recreation Area on the Stanislaus River.  You may want to pack a picnic and spend the afternoon sunbathing on a large river rock; camping facilities are nearby.  Contact:  Stanislaus River Park (209) 881-3517 or (800) 829-7238.

The 130-foot Wawona Covered Bridge in Yosemite National Park, is the only covered bridge in the National Park System.  At an elevation of 4,000 feet, the Wawona Covered Bridge is also the highest covered bridge in the nation.  Built in 1878, the bridge crosses the south fork of the Merced River and leads to an 1880s pioneer village.  Dignitaries and stars said to have visited the bridge, include:  Ulysses S. Grant, Theodore Roosevelt and Lily Langtry.  Contact:  Yosemite/Mariposa County Tourism Bureau, (209) 742-4567.

Bridges were covered to protect the wooden timbers from the elements.  For this reason, Santa Cruz County covered an existing bridge -- now the Felton Covered Bridge.  Thirty-four-feet high to the peak of the roof makes the Felton Covered Bridge the tallest in the United States.  One explanation for the extraordinary height is that it had to be tall enough to accommodate a fully loaded lumber wagon.  Built in 1892 from local timber, it was the last of the Redwood spans.  Damaged in a storm, the bridge was completely renovated in the late 1980s and its centennial was celebrated in 1992.  In 1973 the bridge was designated as California Historical Landmark #583.  The 186-foot bridge crosses the San Lorenzo River just east of Felton.

Off Hwy. 9 northeast of  Santa Cruz , in a privately owned Masonic Park, is Paradise-Masonic Covered Bridge.  The bridge was built in 1872 to serve a gunpowder works.  The large white covered bridge is unique in several ways:  the five-foot overhanging portals distinguish it from all other covered bridges in the state; it has the only remaining examples of once-popular diamond-shaped windows; and no steel tie rods (metal tension rod that supplements wooden posts and diagonals) were used in its construction.  The park is closed to the public, but special arrangements to see the bridge can be made through Paradise-Masonic Park.

California may not have the longest bridge, but it does have the shortest.  At 36 feet, Roaring Camp Covered Bridge is the shortest in the United States.  Located in Santa Cruz County at the entrance to Roaring Camp and Big Trees Narrow Gauge Railroad , the 32-year-old bridge crosses a small mill pond and stream.

The award for best kept covered bridge secret goes to the village of Aptos.  Built in 1974, the 100-foot Aptos Creek Covered Bridge originally was not covered.  Situated on Soquel Drive at the entrance to Redwood Village, an early 1900s motor-court, the bridge was "capped" to add charm to the village.  Originally open to traffic, the bridge has been used for antique shows and even an occasional wedding.  Aptos is located seven-miles south of Santa Cruz.  For information on Santa Cruz County covered bridges, contact:  Santa Cruz County Conference & Visitors Council, (831) 425-1234 or (800) 833-3494.