Yosemite's Bracebridge: A Once in a Lifetime

Bracebrige? Quite possibly the greatest show on Earth! by Barbara L. Steinberg 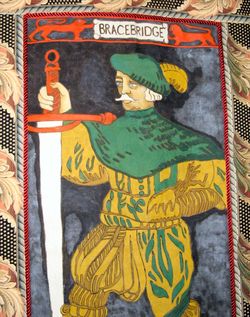 I was always fond of visiting new scenes, and observing strange characters and manners. Even when as a mere child I began my travels, and made many tours of discovery into foreign parts and unknown regions of my native city, to the frequent alarm of my parents, and the emolument of the town crier. -Washington Irving

The highly-coveted Bracebridge Dinner tickets were once available by lottery only, but no more! In fact, tickets and packages for the eight performances are easily purchased online!

As a witness to this historic holiday extravaganza, in your dreams you will see, feel, and hear the merrymaking; awestruck as Bracebridge whirls around you. This dazzling spectacle is set in one of the most blessed places on earth, Yosemite National Park. It is the experience of a lifetime!

A legendary celebration, adapted from Washington Irving's "Sketch Book,"Bracebridge marks its 87th year this December. Trumpets announce the arrival of Squire Bracebridge and presentations of an elaborate seven-course fete -- are made on cue by the sounding of chimes during the performance.  The main dining room of The Ahwahnee Hotel is transformed into an Elizabethan Yuletide pageant. Elaborate props, costumed characters, and period entertainment bring this 17th-century fête to life along with a seven-course dinner.

Consider taking Amtrak to Merced and then YARTS (Yosemite Regional Transportation System) to Yosemite Lodge. Once in the Valley, you can ride shuttles; plus there's a special Bracebridge shuttle to and from The Ahwahnee Hotel, the backdrop for Bracebridge. Many people are reluctant to travel in the snow and with efforts to cut gas consumption using alternative transit is a real bonus. Guests booking a Bracebridge Dinner package for either Yosemite Lodge at the Falls or the Wawona Hotel, should ask about the shuttle service to and from The Ahwahnee for the dinner.

It's really a great and useful piece of info. I'm happy that youu simply shared this elpful information with us. Please stay us informed like this. Thank you for sharing.

Jumping castles must be supervised by an grownup for a amount of motives. They are bright, full of fun, and your guests will simply not want to stop playing on them. Inflatables are straightforward to screen in your lawn and necessitate very tiny equipment to set-up, if any.

Posted by: Picking out Immediate Secrets For inflatables | MUSUSTILIUS.lt | Saturday, 23 November 2013 at 08:36 AM

I was ablee to find good information from your articles.

Posted by: Significant Details In fag bearings - StraightForward Advice | Friday, 22 November 2013 at 03:45 AM

The two vendor can cooperate to additional publicize the quick enhancement of wind energy areaa in China as well as in the overseas markets. As we all know all the Hewland Engineering is a manufacturer of racing around the world mechanical parts. Cerner Corporation - Charles Schwab - Chevron - Texaco - The Cherry Corporaqtion - CIBERCiena - Cigna - Circuit City - Cirrus Logic - Cisco Systems - Citigroup - Clear Pine Mouldings - Clorox - CNACoastcast Corp.

As you roam the halls, step inside classrooms, and talk to teachers, keep an eye out for the following:. But it's very much needed for their proper mental and physical development. It will ensure that children do not get any serious injury while playing.

I like the valuable info you provide for your articles. I will boolkmark your weblog and test once more here frequently. I'm somewhat certain I will be told many new stuff right here! Best of luck for the following!

Exceptional post however , I was wantkng to know if you ccould write a litte more onn this subject? I'd be very thankful if you could elaborate a little bit more. Appreciate it!

What's up every one, here every one is sharing such know-how, so it's fastidious to read this webpage, and I used to visit thi web site daily.