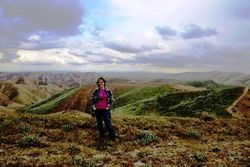 Visible from outer space, California's Central Valley is approximately 450 miles long, 22,500 square mile, and more than 13% of California's landmass -- it's one huge trough! Ancient lands, it consisted of marshes, grasses, and wetlands. Habitat for wintering birds and herds of elk, deer, and other mammals. Rimmed by foothills and mountains; flooded by rushing rivers and streams.

The topography and terrain of the Central Valley has evolved over the centuries. Human intervention has altered this expansive landscape and created what is known as the world's breadbasket. It is a beautiful place where the visual panorama is forever changing. Skies dappled with storm clouds and fields rich with greenery. It is more than food for the masses...it is a visual feast, as well.

Springtime is the valley at its personal best. Three years of drought have dulled some of its sparkle, but my explorer's spirit soared as recent journeys opened my eyes (and yet again) to Central Valley magic. The roads are long, but the sights, sounds, and people keep the experience new. 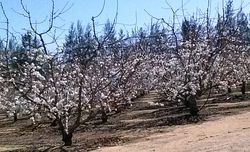 March rains have greened the flats of Sacramento and San Joaquin counties. As you continue south on Interstate-5, the flatlands rise and fall slightly. The stretches of emerald are short lived. You see areas of dry grass inter-mixed; not quite the luscious green of wetter years. The field crops and orchards are ever-present once urban life fades. Peaches and nectarines are dressed in pink. Almond blossoms still cling to branches, but a thin layer of white graces the earth. An agricultural sweepstakes greets you: citrus bounty, newly-plowed earth, seedlings popping and grapevines budding, freshly-shorn sheep dot grassy pastures while cattle graze dry, open range.

The valley is edged on its western border by a series of small mountains. I assumed these were just foothills until wanderlust took me to the top. The vistas are breathtaking. Back roads lead to a rustic hot springs resort and Little Panoche Inn – a local dive bar. But that’s a story for another time.

Desert-like conditions come and go as you wind deeper south. But the richness of the land continues as liquid gold, coursing through the California aquaduct, provides much needed moisture to parched terrain. An oasis in the desert is Murray Family Farms off Copus Road near Pumpkin Center. Like a beacon, colorful roadside signs beckon and draw you to their farm stand. This family operation defines life in the Central Valley. Fresh fruit, fresh juice, homemade pies and cobblers, fudge, tri-tip BBQ, roasted nuts, picnic tables, and u-pick cherries in the spring. It really doesn’t get any better than this.

At the southern end of Kern County, the interstate slowly rises from the San Joaquin Valley into the Tehachapi Mountains and The Grapevine -- feared for its winter storms and seasonal winds. It should be lush and stitched with wildflowers, but not this year marked as California's driest. Despite arid conditions, the 40 miles of mountains are spectacular. If time allows, slow the experience and prolong the descent into the Los Angeles basin and urban life again.

There wasn't enough time to stop. So many photo ops missed and moments to just breathe.The return trip will be the same. But the Central Valley is there -- waiting -- with plenty of occasions to explore and enjoy. 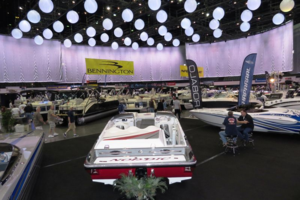 What can be  said about "the ultimate outdoor experience?" It’s all true. The Fred Hall Shows delivers.  Your head will be spinning. Which way to go first? Sensory overload is all I can say. Coming through the main entrance and the boat pavilion, keep your jaw off the floor and try not to trip over your tongue. This is just the tip of The Fred Hall Shows iceberg.

You know the drill. Everything from boating and camping to fishing and hunting and all things in between. Destinations, resorts, sporting attire, snack food, and beer! The new Optics Alley is fan-freaking-tastic!  Attendees were hustling to get it all done. Check-out the list of presentations and maybe take in a little fly-casting practice – the pros are there to serve you…and happily.

Today’s the last day for Long Beach before they take the show on the road  to San Diego and the Del Mar Fairgrounds. Check online for dates and times.

The doors have already opened and the crowds are pouring in. What are you waiting for? Get there before it's gone until next year.