Coffee Works – In roaster terms, Coffee Works was the second wave – when espresso drinks came on the 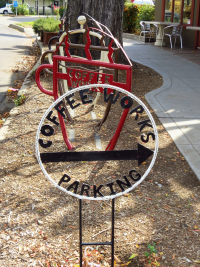 scene. An East Sacramento landmark since 1982, they were coffee central ahead of Java City and Starbucks. Regulars have been coming for decades. Eight to nine single-origin, organic beans roasted on-site. Try the toddy-style cold brew with house-made French pastries. It’s a winning combination. 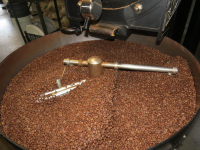 the 'hood was coffee barren circa 2011 when this heavy hitter came on the scene. Passionate coffee devotees leaped; in 2016 their fifth store will open in Carmichael. The standards are core – cups, lattes, and caps – they do simple things very well! Free hour-long, weekly tastings are offered at each store. Educating consumers through their taste buds is ICR 101.

Old Soul Co. – The Alley activation got its start here roasting, baking, and educating in a restored warehouse. The roaster is busy six days with 1,200-1,500 pounds of coffee a week. Ethiopia Wenago Natural scored a staggering 95 points and was selected as the #12 coffee on Coffee Review's list of Top 30 Coffees of 2014. More 90+ scores followed in 2015. In 2016, expansions to R Street and a wine bar and small plates restaurant at 25th and Broadway are brewing.

Pachamama Coffee Cooperative –100% farmer-owned and controlled, Pachamama is truly farm-to-cup. Out of

sight in a Midtown alley, the warehouse sells all organic beans roasted daily in small batches. Yours can be delivered to your doorstep in a Farm Fresh to You produce box. Over in East Sacramento, every cup is slow poured at Pacha’s new retail coffee bar; no breakfasts here. Very Guinness-esque, sample bubbly and smoother nitrogen injected potions. The goddess Mother Earth, Pachamama is revered by indigenous of the Andes.

Chocolate Fish Coffee Roasters – High on customer service, baristas describe coffee notes to regulars and first-timers. Public tastings and barista trainings are available. SPLAT, the latte art throw-down, originated here to create a coffee community. The owners transplanted from New Zealand where barista is a college course. Yes, they have chocolate fish (courtesy Midtown’s Ginger Elizabeth) an iconic candy indigenous to Kiwis given as a “thank you” for a good deed. 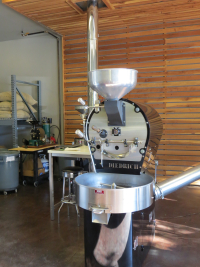 Tiferet Coffee House
Locals like the simplicity. Two sisters embrace their Ethiopian roots with only dark and bold beans; no light-roast here. Looking for a reason to escape your urban tethers? Want to fly, fly away? Fly with the big birds hawk, owl,or falcon? An easy Sacramento getaway to the foothills of Yuba County -- less than 90 minutes away -- you'll find the experience of a lifetime at West Coast Falconry.

So many five star reviews - what can I say that hasn't already been said? This is one-of-a-kind! A California first! You'll want to go do it again and again! The experience is a cross between wildlife education and raptor comedy routine. The falconers, Kate and Jana, are a finely tuned performance -- and lets not forget the important component a impressive collection of hawks, falcons, owls, and (yes) even a vulture. The falconers and the birds were really mugging for the participants and we were loving them back. You won't be bored -- time flies and pardon the pun.

Experience the love, trust, and bond of falconer and raptor. The relationship is clear. A variety of experiences, apprentice programs, raptor camps, special events and more. We got up-close and personal with a Harris Hawk, Barn Owl, Eurasian Eagle owl, and the sweetest Spectacled Owl named Owlsley.

The drive up and down Spring Valley Road -- into the wilds of Yuba County -- is just a bonus. Views are lovely. An adventure worth seeking. Enjoy more back road fun and head to North Yuba Grown farms, wineries, and local shops.

This is unincorporated Marysville near Browns Valley. So plan accordingly when you're heading that way.

More Are You That Woman @ California Travel Insider Best Recommendations

You've likely enjoyed the pleasures of a facial. No two are alike and for the most part you know what to expect. A little relaxation, some exfoliation, then hydration, and VOILA! A new you! When those pores open up, there may be a few extractions. The less than sexy part of this whole process and not entirely painless. Those who have been down this road know the drill. If you've never had a facial, well, you're in for a wild ride.

A friend recommended Desi Threading & More for threading -- another beautification process that hurts like hell. Women around the world have used this hair removal method for decades. No, centuries. You'll be more than pleased with the results to have your eyebrows whipped into shape.

But this review isn't about the threading. It's about a brand of facial you've likely never experienced. You'll have to gauge this for yourself, but it was painful beyond words. And that's a good thing. You can ask the owner, Manisha Hotpeti, to go easier you, but please considering going all the way.

Manisha will clean your skin like it has never been cleaned before. Her massage and acupressure are not intended to relax, but to get blood and energy circulating. Exfoliation? OMG, yes! All those impurities will come bubbling to the surface. In a manner of speaking. Expect extractions even if you have never needed them before.

At the end, a bit of Reiki for that Zen experience.

And your reaction will likely be, "That really hurt!" Don't say you weren't forewarned. Will you do it again? Yes. In fact, Make another appointment before departing. A second facial is recommended in a few weeks -- depending on the health of your skin -- some follow-ups. There is more than one approach at Desi Threading & More so if you'd prefer less discomfort and more on the R&R side, Manisha will oblige. You will look forward to your next "No Pain, No Gain" skin therapy and a happier, healthier glow. Yes, the best facial EVER! Ask about the Folsom location if that's more convenient. She has a major following so book soon.