Cultivating a Path to Defeating Hunger in Sacramento County

The face of hunger….would you recognize it? Thousands of your neighbors live in food deserts and insecure lives when it comes to food.  One in five (18.8%) Sacramento County residents are food insecure living at the poverty level; half survive in emergency poverty not knowing how they will secure their next meal.

Sacramento County, located in the center of the food universe, effortlessly embraced the farm-to-fork movement that has swept the nation in recent years.  Despite its agricultural bounty, thousands of residents go hungry with scarce access to food for lack of money 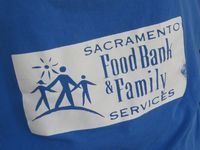 or other resources. Geographic areas known as “food deserts” exist where affordable, nutritious food is difficult to obtain, particularly for those without transportation. Imagine a business that feeds clothes and educates tens of thousands of Sacramentans free of charge. Sacramento Food Bank & Family Services (SFBFS) is that winning enterprise. With its mantra, “farm-to-every-fork,” and a cadre of like-minded partners, it is revolutionary in its vision to eradicate hunger and bring self-sufficiency to the working poor.

SFBFS wasn’t always the only food bank in town. At one time, Senior Gleaners, Inc., California Emergency Foodlink and SFBFS supplied 220 food pantries and closets throughout Sacramento County, according to Blake Young, SFBFS president and CEO. In 2014, Foodlink stopped its food distribution program to focus on statewide distribution of government commodities. That same year, financially-strapped Senior Gleaners approached SFBFS about a merger; about a merger to create a more sustainable model for feeding low-income people. In essence, the Sacramento County network of food banks went from three to one, with SFBFS providing 220 partner agencies with food.

Sacramento’s only food bank works overtime to clothe, educate and feed local children, parents and seniors. Prior to the union with Senior Gleaners, SFBFS fed approximately 50,000 clients per month. Afterward, the number skyrocketed to 150,000.  Every month in Sacramento County, more than 240,000 children and adults, including many seniors, go hungry.  “We’ve become the food bank of the Sacramento County, which is more the rule,” Blake says. “We created a food bank revolution in Sacramento. We’re not just feeding people. We invite them in. It’s a gateway 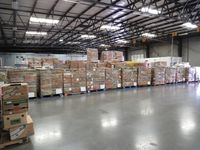 and gets people to the next level of self-sufficiency through family services.”

Blake believes the merger was the right thing to do, but it came with a huge price tag. SFBFS inherited Senior Gleaner’s 110,000 square-foot Distribution Center, The size of a small town, major health and safety improvements were imperative. The increased numbers of families now served by SFBFS added further costs. Tripling the number of clients required an immediate increase in food, trucks, fuel, staffing and volunteers. Plus, the renovation of the historic Arata Brother’s building which previously housed SFBFS to house improved clothing donation and shopping areas and room to grow services.

Accepting this responsibility, the food bank is experiencing a $600,000 funding gap and is looking to the community to become a partner in its desire to make Sacramento County the first food secure county in America.  Many positive economic impacts were realized as a result of the food bank’s merger:  employment of 73 workers and countless contractors (ranging from refrigeration to automotive repair), purchase of produce from local companies and farms, reduced costs in food waste from local grocers, renovation 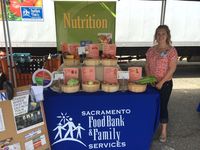 of older facilities, new construction and opportunities for volunteers to give back.

Nearly a decade ago, SFBFS improved its distribution to include fresh fruits and vegetables. It was farm-to-every-fork –a cutting edge concept – before the movement took hold.  Diabetes and obesity, especially in children, was spiraling out of control, particularly among economically challenged populations where access to fresh food is limited or non-existent. An increase in food distribution (9) sites directly brought fresh food to families experiencing food insecurity, and health issues. Families in need can walk or take public transit to their local church or community center where SFBFS staff and volunteers provide healthy groceries and nutrition education.

Recently, we met Maria at an Oak Park distribution site. “Even though I work, this year it just wasn’t enough,” she said. “My daughter told me about the food distribution, and I feel truly blessed. It’s great; everything helps!” 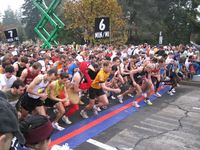 “Wells Fargo supports us behind the scenes. They’re the largest Run to Feed the Hungry team, plus staff regularly volunteers at our distribution center and other events.” Blake notes. “They really stepped up when we acquired Senior Gleaners, Inc. to help with a renovation on the 110,000 square-foot distribution center and equipment.”

Giving and contributing is part of the DNA of locally-owned Raley’s Family of Fine Stores, which partners with SFBFS and other nonprofits to supply thousands of pounds of fresh produce each year.  “We’ve provided families with building blocks for healthy meals,” says Jenny Teel Wolter, Raley's Food for Families development officer. “It’s not just about a full belly, but nutritious food and education, too." Since 1986, she notes, Raley’s has furnished 24 million pounds of food and $33 million from donations, sponsorships and an employee giving campaign. One hundred percent of the money goes directly to the food banks, and Raley’s absorbs all costs. 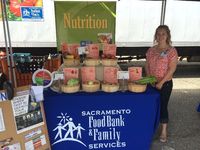 Food banks are making a huge impact on the health scene, adds Blake. SFBFS uses part of its budget to buy produce from local farmers.  “We’re in strong partnerships with nearby farmers,” he says. “They can grow year-round. The whole community benefits if people are healthier. If we can’t do it in Northern California – the Emerald Valley– it would be hard to do it anywhere.”

Soil Born Farms, a nonprofit community garden, provides 20,000 to 30,000 pounds of organic farm produce to SFBFS and the underserved each year, according to Shawn Harrison, the farm’s founder and co-director. In West Sacramento, urban farms supported by the Center for Land Based Learning also supply fresh produce. SFBFS further provides funding to increase urban farmers’ capacity to grow healthy food for distribution.

SFBFS stands for food, but also provides a wide range of services that have increased exponentially since its inception in 1976. The educational component is equally critical. “SFBFS’s approach is holistic,” according to Blake. “It’s not just about food, but services that lead to healthier lifestyles and self-sufficiency. Since moving our food distribution up to North Sacramento, we’ve been able to expand the facility in Oak Park. We offer 14 services including Adult Education, Technology, Youth Education, Health & Nutrition, and Clothing.”

“Produce plus education is the winning formula,” says Barbara Archer, spokeswoman for Farm Fresh to You/Capay Organic. “It’s made a big difference in the health of SFBFS clients. When we first started donating, clients didn’t know what to do with Swiss chard – now a recipe cards showed them the way. Then SFBFS couldn’t keep it on the shelf. A little push makes all the difference.”

“Most people don’t know there are two sides to SFBFS,” adds Pat McClain, chairman of the SFBFS board. “We distribute more than 1.5 million pounds of food monthly. The kid that goes to school hungry isn’t going to get educated. Poverty is cyclical, but you won’t break the cycle through food.”

The family services help people advance—everything from English as a second language and career development to parent education and computer technology.  “We give them the tools. They have to do the work,” says McClain. “Food banks support the working poor who are getting by on a day-by-day basis. It’s important to support our future work force. As business owners we should care about this.”

Who is the face of hunger? It’s the working poor, the seniors stretched beyond their means and the children who go to school hungry.  Food security comes at a tremendous cost, but goes far beyond food; it’s about education and providing services to raise hungry populations out of poverty and to that next level of self-sufficiency.

We say we want a revolution? Well, you know, we all want to change the world. That’s exactly what’s happening at Sacramento Food Bank & Family Services. It represents a new paradigm that rises above and beyond to provide new meaning 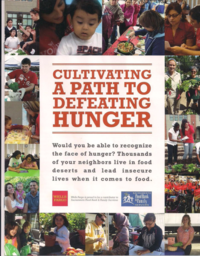 to community growth.  Eliminating chronic illness requires focus on people’s health. Education assures that clients are more informed about what they eat.

Help Sacramento, America’s Farm-to-Fork Capital, become the first food-secure county in the nation and learn how SFBFS is revolutionizing food banking! Volunteer at SFBFS. Get to know partners and volunteers who contribute time and resources. Meet families in our community who have benefited, and learn what it takes to contribute to the health and well-being of working poor families, children, and seniors.

We hope you’ll join this revolution. An integrated system of educational services with food will change the future not only for Sacramento families, but likely families in need across the globe.