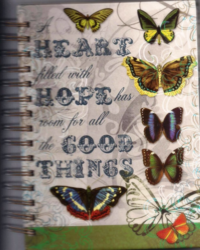 While cleaning out old files – shredding a mile-a-minute for most of a day – I somehow spotted this invoice among the thousands of documents that flew by unread. I paused and unfolded its multiple pages. Deep breath and remembering a day not so long ago. The first of many and then the last. I set this aside and continued shredding with a vengeance.

The deed done, I went to store the remaining files. The drawer I opened contained notebooks – I have dozens – also left undisturbed for years. And there, the journal, the journey of those same days (really) not so long ago. And, so, commemorating that five-year milestone, I decided to pen and share what was just a moment in time. The date order is how these appeared in the journal.

I had my referral for my annual mammogram for a few months. But then I just forgot. That never happens. I kept telling myself, "Don't worry. You'll get around to it." Eventually I called to make an appointment. I know I wrote it down someplace and thought I had the date in mind. Did they call to confirm? Who knows? 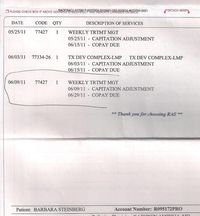 I missed my first appointment. And rescheduled for 7:05 a.m., December 28, 2010. Yes, always bright and early. Get it done and over. I showed up without a care. Just another scanning mammogram - a little discomfort and you're out the door. But then the call comes they need you to come back for the bigger, better test! Why can't they just do that one the first time?

January 9, 2011:  Follow-up mammogram – just the right breast. It's a Saturday morning. How many others are waiting for a similar test? The last time this happened they determined it was nothing. A follow-up in six month. And nothing more.

This time I sit waiting. Waiting for them to tell me I can dress and leave. But no. The radiologist wants to see me. "Get my sister, please! She's out there waiting!"

And there we are, back in the room where large sheets of film – my breast – line the light screen. A nice young man – I forget his name – says something about "clusters of calcification. They appear abnormal. Not on a previous screening."

"You'll need to schedule with your doctor and arrange a biopsy; 85% of time it's nothing," he says.

We leave and I embrace the number, 85%. I tell nearly no one. No need to raise undue concern or worry. The biopsy is scheduled for Tuesday, January 18; 9:15 a.m.

January 18, 2016:  We arrive back at Radiological Associates on L Street. They call my name and for the third time in less than a month, I am disrobing in a closet-sized room; one chair and some magazines.

I wish I remembered the names. Strangely, I still see their faces. Sitting in a small room, asking me questions – this radiologist is a woman. I meet the surgeon who will perform the biopsy. Another woman. I am grateful. Not that men can't be sympathetic but...it is my breast!

They take me into the room. A table. X-ray machines. Screens. Fortunately, the table is well-padded and warm. I lay face down. Left arm stretched above my head. My face turned to the left. Right arm straight down my side. The technician reminds me repeatedly that it's important "don't move!" Once they locate the calcification, if I should move, they might also move and potentially be missed when they biopsy the site.

So indelicate.  My right breast is dropped through an opening in the table and then pressure. The radiologist moves it a few times taking X-rays and locating the area of concern. Once found, the surgeon arrives and reviews the images.

Then she's at my side. The usual verbiage about the local anesthetic. There will be a little pinch, but she'll go slowly. I wince slightly and then there is some more light pressure. Not much more.

Once numb, there's a whining noise. I envision something like a screwdriver spinning into the side of my breast. I never ask to see the device. However, I can see a clear tube running under the table and bits of red flowing past. Nothing to make you squeamish. Then it's over. "Not much bleeding," the technician informs me. Some bandages. "You'll probably have some bruising."

The bruising lasts for weeks! The waiting for the answer just a few days. So much for the 85% – they tell me I have breast cancer.

Dates moving forward were often not notated:  I met with my primary care physician to get the details. Ductal Carcinoma In Situ - DCIS. Words I never knew. Never thought I would know. And now they are part of my very being. You know that new car you bought and suddenly everyone seems to be driving that car? So it goes with breast cancer. So many women seem to be driving this automobile. And almost everyday I meet someone who is either behind the wheel or an experienced driver.

March 11, 2016:  A lumpectomy was easily accomplished by an amazing surgeon, Dr. Amirikia. She was wearing a pearl necklace and earrings with her green scrubs. I liked that and it gave me some comfort. Successful removal of the cancer cells and clear margins in one attempt. Once the incision heals, the surgery is followed by six weeks of radiation.

April 15, 2011: Tax day. The staging begins and a wonderful staff of professionals at the Sutter Cancer Center and my wonderful oncologist, Dr. Rhu made me smile, laugh and (sometimes) cry over 30 days of radiation. It was a blessing that the Center was a 10-minute walk from home.

May 4, 2011: Treatments begin. Afer a couple of weeks, there's a bit of a sunburning; the provide some salve to keep the skin from peeling. And something called "radiation brain" -- a bit of a fog and forgetful side affect. It could just be the stress of treatment and having to remember so many appointments. But it was over and gone shorlty after radiation ended.

June 9, 2016:  Five years later the debate continues as to whether this non-invasive breast cancer, DCIS,  will or won't become invasive breast cancer. So depending on the stage (0-4), a lumpectomy with/without radiation is the traditional treatment. No chemo. And sometimes followed by hormone therapy. Of course they "follow you" for the next five years. For two years, I see Dr. Rhu for check-ups twice annually. Then once a year for the remaining  three years. This year, 2016, marks that fifth year. Sometime later this fall, we will meet (hopefully) for the last time as doctor and patient. While thrilled to be approaching this milestone, it's with a little sadness knowing that unless we bump heads again at Costco (yes, we did!) we won't see each other again.

Whatever the debate was or is, I'm grateful to have been living in the center of such great medical facilities and staff.  As a gentle reminder, I still carry my Radiation Oncology Center ID card in my wallet. And always will.