I love, love, love El Mono Motel & Latte Da Coffee Cafe in Lee Vining, California.  Last year after meeting the owner, Kelly, I was determined to stay at this quintessential California motel. On a recent visit, I did just that!

The cafe is fabulous; cheerful, welcoming, and great place to hang out. Clearly, the garden courtyard, front porch with willow chairs and views of the Eastern Sierra sky keep guests coming back and happy!  Wish they'd spend less time online and more time taking in the ambiance. Some of the best coffee on the "East Side". Made with love, homemade baked goods ATDF!

The motel is another on of those places I adore. If you want the Ritz, don't stay here. For me, this is as good as it gets and rates five stars when it comes to customer service, prices, and location. The garden is enough of a reason to stay. Just ask all the birds. I opted

for a room with shared bath. The rates are great. The room with queen bed and sink was just perfect and included that spectacular garden view. Yes, there is some Highway 395 noise, but I was content. This place is hugely popular with Europeans, especially Germans and most people heading to or from Yosemite and hikes in nearby high country wilderness.

The Mono  Lake Committee bookstore and visitor center is literally across the street. The right turn up Highway 120/Tioga Pass to Yosemite (closed in the winter) is a mile south on 395. El Mono -- close to all of the splendor and great outdoors that is the Eastern Sierra -- is just miles away from the Mono Lake Tufa State Natural Reserve and the Mono Basin National Forest Scenic Area.

When you stop in, give Kelly my best!

Solano Land Trust hike “Where the Wild Things Are" - Free!

Get a great workout and search for wildlife on this hike through the hills between Fairfield, Benicia and Vallejo. Solano Land Trust docents will guide you on an up to six-mile hike through this area, known as the King-Swett Ranches. Explore these lands that are both natural areas and working cattle ranches, learn about the plants and animals that call these lands home, and see sweeping views of Solano County and beyond.  Participants will get a great workout while looking for birds and other wildlife that call this area home. Residents and visitors are encouraged to take advantage of this special opportunity if they can because these ranches in the hills between are otherwise closed.

When: Saturday, September 3, 2016
Time: 9am-1pm
Where: King-Swett Ranches
What to bring: Hiking boots or trail running shoes with good grip, water, and snacks.
Register: Space is limited and pre-registration is recommended at conta.cc/2bKB7F3. Important details, including the meeting location, directions and registration information are available at the registration link above, and on the events calendar at solanolandtrust.org.

Solano Land Trust protects land to ensure a healthy environment, keep ranching and farming families on their properties, and inspire a love of the land. For more information about Solano Land Trust, its upcoming events and to make a donation, visit solanolandtrust.org. 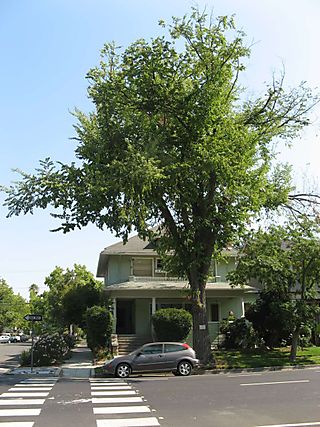 Goodbye to a dear Friend

When I moved to my (nearly) century-old Craftsman in Midtown Sacramento one of its defining exterior features was a towering American Elm. This wonderful old tree was planted sometime after my home was built in 1908. But it is part of the past and Sacramento's "City of Trees" heritage. This aging tree provided much needed shade from Sacramento's sweltering summers and my home's south-facing exterior.

Almost immediately I noticed the tree seemed to be in distress. Because it's a city tree, I contacted the city arborist for a "check up" and to be sure I was doing the best by my senior-citizen Elm. The tree was checked and happily was Dutch Elm Disease-free. It needed some pruning, so I hired a city-recommended firm to provide a little coiffing of the tree canopy and dead limbs. The city's urban forest staff is woefully under-staffed, over-worked and under-funded and so the cost of this operation -- more than $500 -- was assumed by me. I loved our Elm and knew it was money well spent.

Each spring I watched with anticipation as our Elm came back to life. The leafy canopy was not as robust as I hoped, but it was there none-the-less. I would deep-water and fertilize, and on really hot summer days I would provide an afternoon shower to cool it's aging skin. And sometimes a little hug and thanks.

This spring, imagine my joy when the Elm leafed out in full glory. The canopy more beautiful then I had ever seen in my 10 years living here. Besides being a major source of shade, it provided shelter for countless birds and one year a family of baby squirrels who cheered me with their endless comic antics. Our resident hummingbirds often perched among the massive limbs. So I believed it would continue for the wildlife and me.

Quite suddenly, one major limb began to wilt. It had done this in the past; at first I wasn't overly concerned.  But then another limb. And another. I quickly called our arborist! 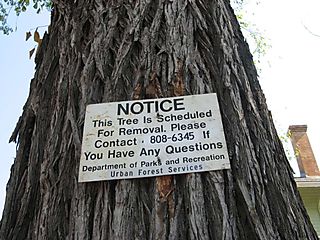 Just this week, the sad news came...Dutch Elm Disease...and my majestic Elm will be gone in two weeks. I am losing a dear, old friend. I will feel every cut of the blade as this aged companion is removed. As soon as weather permits, I will honor its memory with a new tree. A hardier scarlet or red oak, which I hope will grow and fill the empty space.

Care for your trees, especially those encased in park-strip concrete. Deep water and fertilize on a regular basis. Not all trees are susceptible to DED, but they need TLC to stay healthy and strong. They are so important to the well-being of our environment and our souls.

Another day of century heat

Scarcely diminishes with the setting sun.

In an offering of relief,

I bathe the withering and cracked skin

With the cold spray from my hose.

I am especially careful to soak each limb,

The soul of my towering Elm sighs,

And, with grateful arms,

Bends to embrace me. 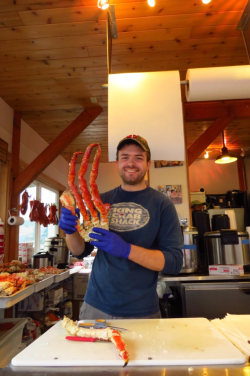 The 5-star Excellence rating for Juneau Food Tours says it all. What a day! What a feast! Just a few small, delicious bites and my tummy was doing a crazy, happy dance. Yikes...food coma! Chowing my way through Juneau's burgeoning food scene. Local crab, local brews, local salmon, local food artisans! Yep, I was a gleeful locavore. Crab bisque from those king crab legs had me weeping tears of joy.

Tracy's King Crab Shack, Panhandle Provisions, Alaska Knifeworks, V's Cellar Door and Alaskan Hotel and Bar - some of Travel Juneau's best. Wow! Did someone really tell me there's no good food here? Insanity! Great history and background of the city. I won't soon forget. A truly authentic experience. Midgi is energetic and enthusiastic. And why not? Beautiful scenery, delicious food, and Alaska!

Midgi's an outstanding storyteller and shared an insider tip about the local Commercial Fisherman's Memorial. Shhh, the secret's safe with me. Rain or shine, you'll be smiling! 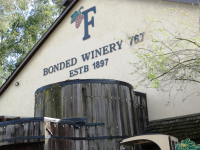 In the late 1800s, Sacramento’s viticulture commerce was booming. With thousands of acres of grapes and an urban winery producing 500,000 gallons of wine, it already had an oenophile reputation. President Teddy Roosevelt was served Sacramento wine in 1903 and said he would “drink them as long as he lived”! Small wineries flourished in the region until Prohibition and then survived by selling table grapes or producing sacramental or medicinal wines, but eventually urban vineyards and wineries declined. Today, four urban wineries continue Sacramento’s proud wine tradition. The vineyards are gone, but regionally sourced grapes are fermented, blended, and bottled within our urban borders and provide contemporary wine and dine experiences. Wine bars and tasting rooms offer more options to explore vintages both locally and worldwide. 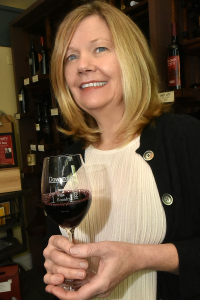 Surrounded by wine appellations, Sacramento urbanites have countless offerings to sample a bit of the grape but with busy schedules those scenic drives are often bucket-listed. Sacramento’s urban wine bars and wineries provide a quick escape via bike, Uber, taxi or designated driver to hundreds of wine selections.

Kate Chomko made a circuitous route to Sacramento by way of Europe and Napa. Honing culinary skills at the Cordon Bleu and Culinary Institute of America – her credentials are rock solid. A friend and I dreamed about opening a tasting room. Sacramento made sense – it’s the center of California with millions of visitors, but no one was really telling the story about the regional wines. I moved here from Napa to open Downtown & Vine. This was the tasting room for 12 regional wineries!  We do wines from other places, but try to focus on local, small producers and family-owned wineries. Our wine flights are themed – Highway 101 Flight – or winery or region specific – to make it an experience so someone can really learn something and have fun.  Visitors who can’t get away to taste wine, can come here or take local home – we ship to 48 states. Our new Harvest Room features live entertainment to pair with local wine, cuisine and desserts.

produced classic Italian wines since 1897. Once surrounded by 480 acres of grapes, the winery and restaurant are secluded in an industrial corner of Old Florin.  The restaurant features traditional Italian fare including Grandma’s pot roast and a scrumptious meatball sandwich – mangia, mangia! Traditional wines such as Chianti, Burgundy and a signature Port are available only at the restaurant and tasting room. The restaurant was carved out of old fermentation tanks surrounded by redwood barrels. Old world charm, but Frasinetti is absolutely in vogue!
7385 Frasinetti Road; 916-383-2444

Revolution Wines – From crush to bottle, the first full-production winery to operate in the city of Sacramento 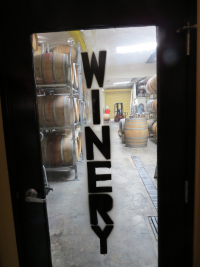 RailBridge Cellars & Company – A dozen varietals are blended and bottled at North 16th urban winery and retailed at eatery and Penthouse Lounge in historic Elk’s Tower. 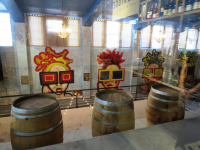 Cabana Winery Wine Bar & Kitchen –Robert Smerling, winemaker and owner, traded his wine country roots for this urban winery. On the edge of East Sacramento, this diminutive winery has a huge neighborhood following.  Educating customers about Wines of Cabana is the name of the game. Their Sauvignon Blanc and Boston-style Pizza are both “double-gold”.  Wine flights and elegant charcuteries are a perfect pair on the dog-friendly patio.
5610 Elvas Avenue; 916-476-5492

A Taste of Urban Wine Bars

You'll never notice the overcast, chill and drizzle on this amazing whale watching adventure in Juneau -- the heart of southeast Alaska. Juneau Whale Watch delivered on the promise to get up-close and personal with some humpback whales. Well, as up-close as law allows. However, if the whales come to you -- that's your lucky day. Even from a distance, these sea mammals put on a stellar performance. Multiple blow holes and whale tails were a thrill. On the chase and in look of that next sighting, the crew -- Captain Dirk, Emily and Emma -- were the perfect hosts and interpreters

providing insight and lots of smiles. Less than 24 hours in Juneau Alaska this outing out of Auke Bay and up the Inland Passage was over the top. Oh, lets not forget all the bald eagles and spectacular Alaska scenery along the way. Thank you Juneau Whale Watch for being part of the bucket-list trip north!