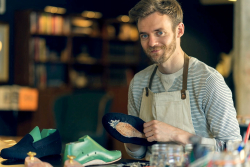 Studying film at the prestigious Brooks Institute in Santa Barbara, Ben Schwartz returned to Sacramento roots to complete his degree. He started making films and then settled on a 9 to 5 State job. A regular paycheck with benefits seemed like a safer route, but not his destiny.  A chance meeting with British shoemaker was pivotal. Nine years later, his shoes are made for walking.

"I found this book on making shoes, but didn’t act on it for about a year. There were no apprenticeships; it was just a hobby.  A friend suggested having the designs factory made, but we decided to make them ourselves.  In 2014, there 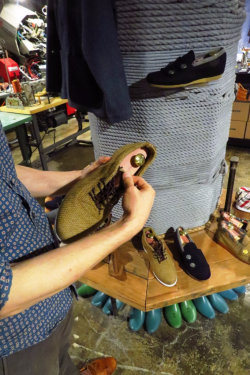 was one prototype when we went online. The idea of work changes when you work for yourself; more hours than you’d ever work otherwise. I sold everything I owned and, with two friends, we “bootstrapped” the business. It’s surprising, in a good way, how much local support we received. We’ve become such a throwaway society, I want to be a model for other small brands being mindful and making things that last."

Posted at 10:22 AM in Meet Your Makers Made in the USA, Omni-Local | Permalink