« Relax Sacramento Spaaaaahs | Main | Fairfield California Is All About Discovery »

It's all about the bats in the Yolo Basin 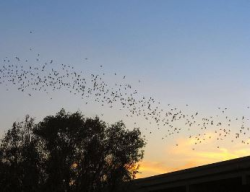 Most people run screaming in terror at the site or thought of a bat. Visions of Vincent Price and Count Dracula horror films quickly come to mind. The movies and stories of old have convinced us that bats -- all bats -- are blood-sucking vermin. Nothing could be further from the truth. A recent visit to the Yolo Basin Foundation chased away any fears and squelched the myths and lore of vampire-ish behavior.

Every summer, the Yolo Basin Foundation and NorCalBats, dedicated to the rescue, rehabilitation and release of bats throughout Northern California, conduct educational seminars about local bat colonies, their ecological importance, and efforts to conserve California bats. Specifically, Mexican free-tailed bats in   the Sacramento region.

Bats are not flying rodents. The truth is, bats are more like humans then you probably realize or care to know. Bats are mammals. They are warm-blooded and have fur. Bat babies are live births and they drink milk. Most bats only have one baby at a time, though occasionally they have multiple births. Sound familiar?

The majority of bats eat bugs. Some eat fruit. And of the 1,100 species worldwide, only THREE species actually "drink" blood! Of those, two species drink the blood of birds and one actually drinks the blood of mammals -- though mostly cattle and not that of beautiful young maidens. Now don't get too nervous. Unless you're traveling to Central or South America, you aren't likely to encounter any of these three blood-hungry creatures.

Another myth eliminated on this trip: Bats are not blind! In fact, they see in black and white and use echolocation to find their prey in the dark. It's a remarkable navigation system. What I'd really like to know is how someone figured out the B/W thing!

The bat presentation was fascinating and lasted about an hour. But then the big excitement and the thing we were all waiting for: the bats! Public tours can be packed and usually sell out, but we were a small group of maybe 7 or 8 being guided by Corky Quirk who is a lover of bats and expert in the field. We piled into a van and bumped along the dirt roads into the Yolo Basin, a flood plain between Davis and Sacramento. The land is farmed during the dry months and flooded in the rainy season. Bodies of water (some natural and some manmade) attract a bevy of wildlife year-round. During drier months, you can actually drive into the basin but for most people it's viewed from Interstate 80/The Yolo Causeway which crosses the basin for almost three miles between Sacramento and Yolo counties.

Little did they know that constructing the "Causeway" created the most perfect of bat habitats in the form of expansion joints under the bridge. How perfect? Well, how about 200,000 - 250,000 bats perfect! This is actually a maternal colony. Females only! (The guys hang-out in another location. Hmmm, not such a bad idea!) When the females give birth in early July the colony will more than double. I don't know about you, but that's a lot a bats! 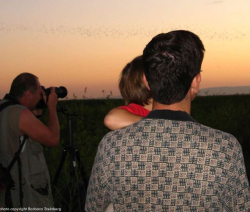 Along about sundown we traveled approximately three miles into the Basin to the portion of the bridge where the bats colonize. Along the way we saw great egrets, snowy egrets, and night heron. Avocets tip-toed through shallow rice paddies and great blue heron strutted slowly, gracefully across the field. The dots of red on black bird shoulders bounced and bobbed among the tule and rushes. And the flash of one lone yellow-headed black bird elicited a gasp from me. A clutch of baby ducks skittered away as we passed and three young Canada geese ran comically down the road in search of their parents.

We arrived at our destination and waited for the big moment…the bat “fly out!” It comes just around sundown and on this particular evening, somewhere around 8:35 p.m. And just as promised and on cue tens of thousands of female bats poured – in a steady stream – out from under the bridge. Strangely there is one exit point. They fly out over one particular tree. Up into the sky and then begin to disperse into smaller groups, heading off for an evening of bug gorging. There’s one major exodus followed by several smaller groups.

It was out of this world! And just another in a long list of California ’s most amazing natural wonders.

For more information on the Bat Talk & Walk, visit the Yolo Basin Foundation website: www.YoloBasin.org and NorCalBats at www.NorCalBats.org.

NorCalBats is funded through donations and presentations. No money is received from California Department of Fish & Widllife, U.S. Department of Agriculture, any state or federal agency, or major corporation. Tours are $12 each; children 15 and under are free.