Sacramento's urban tattoos are a labor of love

This article originally appeared in Sacramento News & Review about 10 years ago. At that time, these murals were raising quite a stir, even at City Hall. The fear? Oh, that people would perceive them as graffiti. Imagine that! And now, well, now murals (urban tattoos) are totally the rage. Wow, why didn't I think of that? I photographed dozens of these urban tattoos before and after the article appeared. Sadly, many of them no longer exist. Painted over in the name of progress or simply a lack of vision. So glad these incredible works of art live on in my photo archives.

Sacramento has finally come into its own. The Central City is evolving, and Midtown is emerging as a swish and swanky scene for every age (and not just the 20-something crowd).

Urban dwellers and visitors ought to note there’s always something new to see. Lately, it’s been a visual cornucopia of what should be viewed as art in public places. Not the usual sort of government-commissioned art, but a collection of 21st-century murals cleverly and appropriately dubbed “urban tattoos” by Bonni Shasky, a local landscape designer.

One has to love this innovative wall art. Its edgy and funky appeal makes less attractive buildings seem born again. And our wonderful City streetscape is taking on a far-out chic appearance that is strangely reminiscent of the ‘70s psychedelic.

The first of these urban tattoos appeared on an unsightly corrugated metal garage at 21st & O streets. Entitled, “A Labor of Love,” it pays homage to the nearby Limon’s Barber Salon. The artist, who prefers to be known as 2Hermano, was also working out some love issues of his own which he resolved through his own labor of love – painting. Whether it was timed or planned, this first urban tattoo inspired a collective of artists to get busy adorning structures throughout the city. 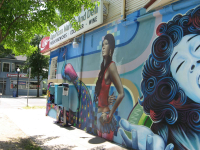 With the approval of building owners, artists 2Hermano, Shaun, Daniel, Josh, Miguel, Steve, and Max (there may be others) have given everyone a new reason to walk. Not just during the Second Saturday Art Walk, but every day. Retro, free-hand spray-painted images now embellish Two Women & an Armoire and American Market  & Deli. At Bon Air Market & Deli, their new urban tattoo playfully promotes sandwiches, sodas, and Sacramento’s skyline and includes the likeness of the store owner’s son.

A collaborative-work by Shaun, Daniel, and Miguel, on the 24th Street side of American Market & Deli, a peacock, a woman soulfully singing, and a modish chick – friend of one of the artists – is probably one of the most colorful tattoos. And the market’s shabby interior is enlivened by Shaun’s 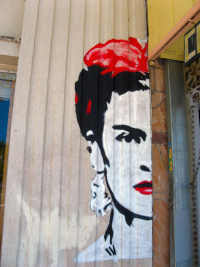 fanciful forest of trees with faces, blowing autumn leaves, and a young girl with wind-swept hair. A once less-inviting environment is welcoming and full of life.

Over on Del Paso Boulevard, the half-face of Frida Kahlo bedecks a wall at Sol Collective an arts and cultural center located at 2010. Other examples of this new urban street art can be seen on display inside. To be expected, not everyone embraces this art scene. Someone complained to the City about Frida, but fortunately she lives on. The artists have specifically chosen images to balance this art form so “not to frighten people” – to make it more acceptable. The point isn’t to encourage tagging and unsolicited graffiti.

There is wine and then the Amador cookie the best ever 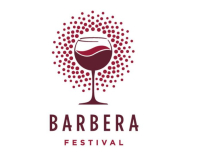 Journeying today to the annual Barbera Festival, I have many things on my mind including the sights, sounds and tastes of incredible wines and foods at this highly-regarded event. The highlight, of course, is California's unsung varietal wine, Barbera!

The Barbera Festival is an outdoor wine and food festival highlighting Barbera varietal wines from more than 70 wineries from throughout California and beyond, including the Sierra Foothills, Napa, Sonoma, Mendocino, Paso Robles, Livermore, Ventura County, Lodi and the Bay Area. In addition, noted area restaurants and chefs will again offer prepared gourmet food for sale, and over 60 vendors of art and artisan crafts will be showcasing their wares. While I'm heading for a long day of festivities and feasting, my journey must include Andrae's Bakery in Amador City. I am really not big into desserts or chocolates; yes, I know it's sacrilege by some people's standards! But I have to tell you, Andrae's has created this irresistible Nibby Cookie- chocolate, hazelnuts, and cocoa beans -- that is just about the yummiest thing this side of Heaven. I will not be deterred. These cookies will be mine. Also, a stop at Fine Eye Gallery in Sutter Creek will round out a perfect day exploring Amador County.

That said, better get going. Long day ahead and my Subaru is waiting.

If my Subaru can't get me there, that's a good reason not to go!

Posted at 08:49 AM in Best Bites, Gold Country, Meet Your Makers Made in the USA | Permalink | Comments (1)