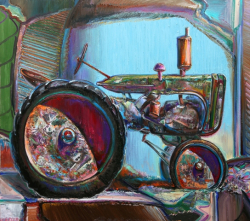 "I began painting farming artifacts and machine culture while, ironically, living and working as an artist in Brooklyn, New York. From time to time I would visit Sacramento, and I began to paint outdoors in the delta where I became increasingly aware of agricultural machines. They seemed like sculptural sentinels dotting the landscape, like a David Smith sculpture. One day in the delta, I started to paint the form of the tractor itself. The tractors manifested a powerful intimacy that suggested many secrets, especially the older tractors richly draped in rust and chipped paint. I felt they displayed a kind of insistent consciousness at work that resonated with me.

As I continued to branch out, I painted more advanced machines such as droids and half-human/half-machine composites. I realized there was a type of lineage occurring, as if the tractor was the grandfather to artificial intelligence. I perceived a type of dance between the organic and inorganic; a sense of a collective consciousness at work.

What Is New In This Body Of Work

Raised in a family of professional photographers, I have always thought about different ways of integrating photography with oil paint through image transfers and collage. The collage elements in my work are all specific and mostly consist of photographic imagery taken from the “Body Environment Series.” In this series I use aerial imagery of urban and agricultural patterns taken from a helicopter and project them onto the human body, using up to five different projectors at once. Then, creating a type of digital collage, I create random compositions.

All kinds of disruptions of form occur, from blurring to pixelation and inverting. For me, these digital compositions are like an organism mat that is half organic and half artificial. There is a repetitive nature of figures and forms that celebrate motion, much like Italian Futurism. This motion echoes the great accelerations in our present time, such as technology, connectivity and environmental change.

Other influences are Gerhard Richter's experiments in blurred or scraped patterns, the re-introduction of magic realism elements by artist Peter Doig and the miniaturized but large-scaled installations of Geoffrey Farmer.

In the “Geneticists” we see a woman who is immersed in the possibilities of the genetic frontier. This includes the future possibilities of the convergence of organic and mechanical integration (with both the positive and negative effects) as well as the unforeseen trajectories of self-evolving systems or the imagined singularity phenomena.

In “Lone Scout” (an image after Remington) we see a person, or perhaps an artificial intelligence, on horseback peering into a web of financial networks. This image is about connectivity, trailblazing and risk-taking. Time also threads through the image as there are elements of past, present and future recombining.

In the painting “Levitation” a person is standing bare in front of an antiquated grader that has a self-emanating glow washing and staining the nude in turquoise.

In “Parisian Graffiti Tractor”, a painting I started last year while in Paris working on separate photography installation project, we see a giant crusted machine. An under-layer made of image transfers from photographs I shot in the working class commune of Saint Denis depicts urban fragments such as graffiti walls.

I always start my work with a concept. Then I work from memory with a series of drawings, re-imagining or completely inventing a new machine, meshing it with environment/time elements. Although some of this work presents archaic machines, conceptually it relies on the increasing intimacy in our 'present moment' between people and technology. Some of the machines may not be 'current,' but the intimacy is increasingly of this moment."