This essay, written by Vern Gersh, appears in the 2018 Mono Lake Calendar.

“Never give up for that is the time and place that the tide will turn.” —Harriet Beecher Stowe

Forty years ago, in the Eastern Sierra, the tide was running. Like all tides it ran in one direction. Its flow must have seemed inexorable as the waters of life were sucked away.

Shakespeare referred to living in “the tide of times.” The tide that has been running strongest in my life is the stream of change. When I was born in 1955 there were half as many humans on the planet. Nothing human-made orbited the earth. There were fewer than 600 pizza parlors in the entire United States. The majority of Americans shared their phone line with a neighbor. You would dial that phone and were tethered to it with a cord. There was one Mexican restaurant in the city of half a million Americans where I was born.

Forty years ago, when the Mono Lake Committee was born in “the tide of times,” the world was divided by an Iron Curtain with half of Europe in the thrall of the Soviet Union. There was no space shuttle, no cell phones, and computers occupied full rooms. Google was not a verb, email and “text” were unknown concepts. Terms like ecology, environment, and climate change were learned in college, if at all. There were more than twice as many vertebrate animals in the wild. Even now we are still too ignorant to know how many species have been driven to extinction in those forty years.

In the flow of the tide, there are organisms. A benthos hangs on, buried or clinging to whatever it can. A plankton can swim within the tide but, ultimately it must go along with the flow. And then there are the nektons.

Nektons can swim against the tide. They have the strength, vigor, and determination to overcome the phenomena brought about by titanic forces beyond their control. 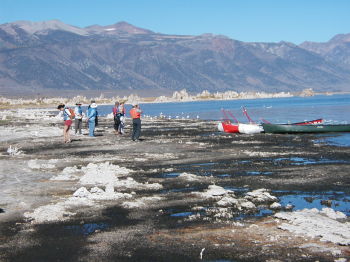 People have changed the face of an entire planet. Our strength, vigor, determination, and intelligence have harnessed titanic forces. The tide we have set in motion has too often been careless of the consequences.

The political and societal forces in my lifetime have ebbed and flowed. Our commitment to the world we leave to future generations has washed to and fro but worldwide the tide seems to be running out.

Even here, in the United States of America, political forces seem to have turned. A nation, whose scientific prowess has led the world, seems hesitant to lead.

Henry Wadsworth Longfellow said, “The lowest ebb is the turning of the tide.”

Like the benthos we can cling, hunker down, and hope for better days. Like the plankton, we can paddle within the current. Forty years ago, a dedicated few on the shore of Mono Lake formed a committee and stemmed a tide at that place and time.

The great Nordic king Canute had his throne placed on the shore of the ocean. Resting on his throne, in a monarch’s voice he commanded the tide to turn. It did not.

Forty years ago a few nektons changed things. They did what Canute could not. If we join together no power or earthly king can stop us.

Vern Gersh is a former guide and naturalist, now retired. A lover of birds and plants, Vern is leaving his heart in the Mono Basin for the next adventure, retirement on the Colorado Plateau.