Falling in love with Stockton Boulevard 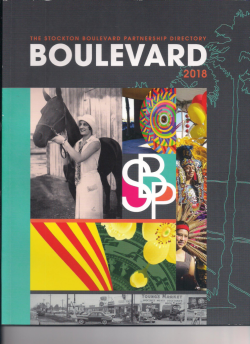 In 2017, I had the great good fortune to be asked by the Stockton Boulevard Partnership to explore and write about Stockton Boulevard. While many wondered or asked, "What's there to explore?" My response was, "I'll let you know when I'm done." I wasn't new to the Boulevard having shopped at the Asian markets for years and frequented Luigi's Pizza back in the '70s. Still, I had no idea just how amazing the experience would be. Meeting and making new friends along the way; it was thrilling. Decades ago, Stockton Boulevard was a place and a community. Families lived and worked along its route and corridors. Many longtime residents have wonderful stories to tell about the history of Stockton Boulevard "back in the day", some of which will be recounted here, along with other snippets about the Boulevard's past and present.

I continue to explore and discover this once vibrant highway and neighborhood -- the people and places that made it great and a new generation that will make it great again. I fell in love with Stockton Boulevard and hope you will, too! 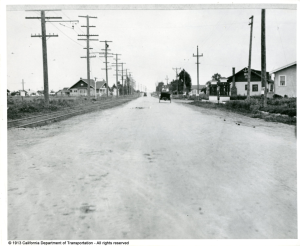 More than 100 years ago Stockton Boulevard was a thriving transportation corridor linking the cities of Sacramento and Stockton. This function ended in 1961 when State Highway 99 replaced Stockton Boulevard as the regional transportation artery. Although the lengths of the new freeway and the former street route of Stockton Boulevard were almost identical, eight to 10 minutes were shaved off travel time when driving the entire distance. This was big news in those days! Then, as now, delays on along the route were caused by restricted speed zones, signalized intersections and narrow lanes.

The Central California Traction (CCT) provided interurban train service from Sacramento to Stockton and provided local streetcar service to two new neighborhoods – Colonial Heights and Colonial Acres – and commuter service to the central city. These neighborhoods were built along the main line on

Stockton Boulevard between 21st Avenue and Sacramento Boulevard (now known as Broadway). The CCT stopped offering train service in 1933, but continued offering streetcar passenger service until their system was sold in 1943.

Historic Highway 99 lives on. In 2017, Stockton Boulevard is a major transportation artery connecting Sacramento's Central City and South Sacramento. However, you can still drive (West and East) Stockton Boulevard to Galt. It requires some zigzagging and creative use of Google Maps.

Take me to the fair: Then & Now 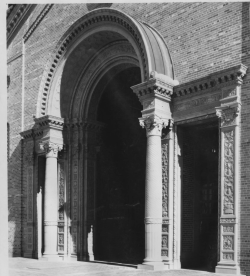 The first California State Fair was held in San Francisco, October 4, 1854, drawing more than 5,000 visitors.  The fair was held in a different city each year, with Sacramento hosting in 1855.  When the exposition returned to Sacramento in 1859, it was decided that a permanent site should be found. By 1860, a six-block site bounded by E, H, and 20th and 22nd streets was purchased and was home to the state fair for the next fifty years. An Agricultural Hall at 6th and M streets was used for exhibitions until 1884 until a new exposition hall, completed in 1884, was built at 15th and N streets in Capitol Park. 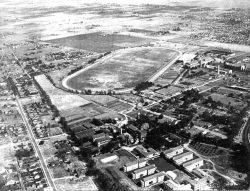 Increased attendance at the State Fair forced the purchase of 80 acres just outside the (then) city limits on Stockton Boulevard. The first fair was held there in 1909. The admission price was $.50, which had remained unchanged for 39 years. Continued growth caused that site to be expanded by 75 acres in 1937. By the 1950s, the State Fair annually was attracting 750,000 attendees, considered a top attraction in America through the 1950s and one of the top five fairs in the nation; it was a boon to the Stockton Boulevard bringing jobs and tourism dollars to the community.

In 1968, the California State Fair moved to its current location at Cal Expo.  Much of the Stockton Boulevard location was acquired by the UC Davis Medical Center. Two remaining historic structures still stand at Stockton Boulevard and Broadway.  The old fairgrounds stretched for almost a mile north and east from that intersection. Currently vacant, the majestic Governor’s Hall marked the entrance to the fair. The adjacent Agricultural Pavilion (2921 Stockton Boulevard) now houses the UC Davis Clinical Transactional Science Center. The Center is one of approximately 60 National Institutes of Health-supported centers funded to facilitate and accelerate the study of human health and disease to bring new treatments to patients and communities through biomedical research.

Read the rest of the Stockton Boulevard stories: