When it comes to covered bridges, California can brag with the best of them. “What!?” you cry. You thought only New England claimed ownership of those marvelous portals to the past? Not true!

What California may lack in quantity, it certainly makes-up for in quality. Californians can flaunt the uniqueness of their covered bridges: the tallest; the only one with three distinct roof lines; the only covered bridge installed backwards and the longest covered bridge. 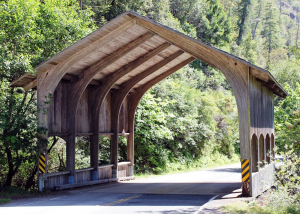 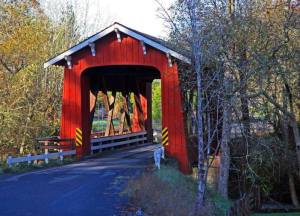 For many years, Zane’s Ranch bridge had the distinction of being the last covered bridge built in the state. Then in 1967, the Jacoby Creek bridge was built. Located just six-miles north of Eureka, the bridge leads into the plush Brookwood housing development. Built primarily for aesthetic reasons, the 68-foot Jacoby Creek is a gentle reminder of by-gone days. To reach Jacoby Creek, take the Samoa Blvd./ Arcata exit off Hwy. 101. Turn left and drive 1.3 miles to the bridge.