Wild Rivers Coast: There’s a reason why on the Smith and Klamath rivers 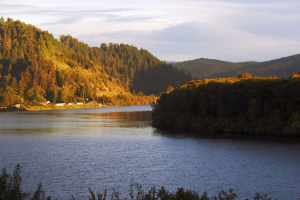 n was barely breaking through when fog began rolling in across the mouth of the Smith River. Where river and ocean unite feels holy. Harbor seals – almost ghostly – gaze out across the shallow. A community of cormorants Zen(ly) attempt drying their wings. Brown pelicans and gulls share the sandspit. A lone angler casts again and again. He confides it’s been rumored salmon are running better on the Rogue and Klamath rivers. Still, he’s content. I watch with quiet respect and retreat once my camera is satiated.

Some 30 miles away, we strolled a considerable spit separating the Klamath River from the Pacific Ocean. One more peaceful world, the lone inhabitants walking or sitting quietly we reverently contemplate this sacred space. The tide is returning and waves crash to the shore. A swift undertow – the cold water just licks my naked feet as I scramble away.  The Klamath has journeyed far – 263 miles from Southern Oregon – to wed itself to the churning ocean.

These are the reasons why along the Wild Rivers Coast.