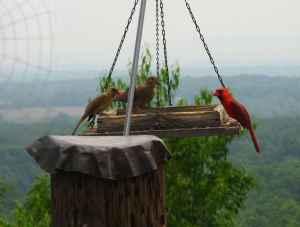 Distant from where land meets sea,
Human trappings seem faraway.
Restless thoughts keep sleep at bay,
Rise! Watch! Hear the break of day.
In predawn light a masked invader, indeed,
Uncovers a treasure trove of oiled seed.
Lid unlocked for this morning graze,
Is undisturbed by human gaze.
Cardinals he, cardinals she,
Mourning doves and chickadees.
All have come to play a part,
A serenade of Dawn's symphony.
Three decades here brought lasting rest,
On a hillside blessed by Nature's hosts.
Witnessed the seasons migrating through,
An island peace on the greenest coasts.
You can never tire of deer at play,
The hummingbirds hum, a distant cow moans.
Rise-up. Rejoice. Greet the day!
In shrouded mist, this Blue Ridge home.

Barbara L. Steinberg
Bluemont, Virginia
June 24, 2007
Back story: This was about my brother's home in the Blue Ridge Mountains in the small village of Bluemont - once known as Snickersville. More than once we sat around the kitchen table elbows deep in our favorite hard shelled blue crab. And so, the mountain retreat came to be called the Crab Outpost. 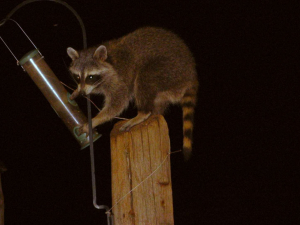 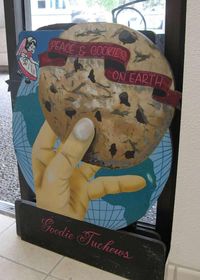 o hear that some of you are not into sweets! A box of expensive chocolate truffles holds no fascination and luscious cakes aren’t your Achilles’ heel. You don’t wait breathlessly for all those candy-laden holidays – Valentine’s Day, Easter, Halloween, or Christmas – to be swept away into a sugar coma. However, on the rare occasion when your sweet tooth is itching to be scratched do you know where to go? A place – special above all others – called Goodie Tuchews. Sacramento’s bona fide cookie castle and where Terry O’Reilly, owner and lone baker, reigns as the Cookie Queen.

It’s amazing – nay, stunning – that longtime downtown residents and workers say they’ve never noticed the cookie heaven at 1015 L Street (circa 2007) and for many more years at 10th & J streets. Terry’s love affair with cookies pre-dates Goodie Tuchews’ 1981 opening. For five years she honed her cookie skills as a regional manager for Cookie Magoo, a Berkeley cookie chain (which eventually succumbed to the wilds of Mrs. Fields.) Terry had a short-lived break on the road to cookie connoisseur when she went to “live” in Europe . Three months later she was back in Sacramento working at the family-run Goodie Tuchews.

Terry’s dad came up with the 10th Street location. Though lackluster, the rent was cheap. And the name? Just a fun play on words, Goodie Tuchews, it was somehow fated. They found out after the fact that people use to call the Cal Western building the “Goodie Two Shoes Building ” because it housed so many non- profits. Terry, along with her father, Gerald, and six siblings crafted their cookies. Six Cookie Magoo recipes (Terry was granted these as long as she stayed out of the Bay Area) evolved into 19 and a local cookie legend was born. Eventually the other family members left the business and Terry became the cookie maven in 1994.

In more than 25 years at her 10th Street shop and now 13 years at 1015 L Street, Terry has baked thousands and thousands of cookies. About relocating she said, “Everything happens for a reason. The new space is luxurious by comparison and a better location.” Though she’s joined the ranks of prettier storefronts, her cookies will never be cookie-cutter. Each one is made with love. The most popular cookie is always the semi-sweet, chocolate chip without nuts. The only cookie to ever be retired was the gingersnap – due to lack of interest. And rumor has it that the chocolate cookie with peanut butter chips is a real “adult cookie”…try it with red wine. My personal favorites are Snickerdoodle and Chocolate Chip Macadamia Nut!

Quoting the Cookie Queen:  “People said, ‘We thought you’d never make it!’ I never imagined after more than 35 years that I’d still be doing this. I made myself a job that I love. My motto has always been, Peace & Cookies on Earth!”

I say, "Amen to that and eat more cookies!"  You can also enjoy Sacramento's Best Cookies and Ice Cream Sandwich!

Posted at 08:40 PM in Best Bites, Gold Country, Meet Your Makers Made in the USA | Permalink | Comments (0) 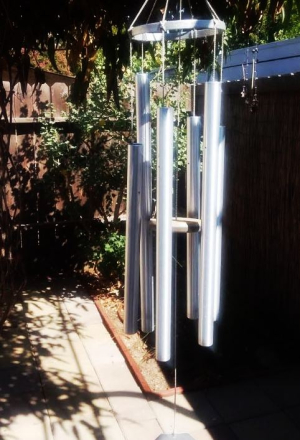 To hear the most heavenly sounds click on the wind chime images—harmonically tuned aluminum—longer, clearer resonance. I tell you, once you've heard a Grace Note Chime you'll forever recognize these incredible tones.  With a long history (more than 25 years), the business was born out of the inspiration and dreams of brothers Jeff and Mark Kile. And a successful history it's been. This talented California duo still creates their magic in the small community of Mariposa California not far from Yosemite National Park in a warehouse along scenic Hwy. 49 and the back roads of California's Gold Country.

The chimes are addictive and have a dedicated following. With prices

ranging from $42 to hundreds of dollars, lovers of Grace Note are true fans. You too can own one, two, or more of these fabulous California made wind chimes - lyrical works of art. The chimes are available online and also at the Grace Note facility in Mariposa, California.

Grace Note also practices environmentally safe policies in the making of each and every wind chime. To help safeguard the planet for current and future generations Grace Note:

Posted at 05:46 PM in Meet Your Makers Made in the USA, Omni-Local, Road Tripping w/Subaru | Permalink | Comments (3)