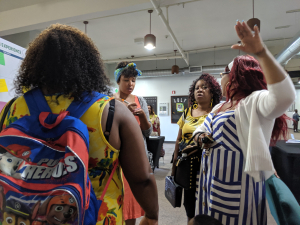 The Public Works Department of the City of Sacramento is planning future transportation improvements on Stockton Boulevard. The two main focuses of this effort are improving traffic safety and mobility. The plan will be adopted by City Council in the summer of 2020. Between then and now, city staff is seeking feedback on how you’d like to move on Stockton Boulevard in the future. With the number of people traveling along or across Stockton Boulevard increasing, and doing so in a fixed amount of space, we’ll need to think differently about transportation.

What is a corridor study?
The study will develop a plan to make changes to the physical street based on research, analysis, and listening to the public – those who use (or avoid) Stockton Boulevard today. The result will be a document that recommends changes to the sidewalks, roadways, and intersections. Often called a Complete Streets plan, a plan like this focuses on the mobility of all modes – pedestrians, transit riders, drivers, and bicyclists.

The project team spent time listening to the community and going to where people are to seek feedback from the community including at Junior Giants games, Colonial Heights Library, bus stops, a local church congregation, Oak Park Farmers Market, and presented at Veterans of Foreign Wars Hall and an Asian Pacific Chamber of Commerce events. An online survey in English, Spanish, and Vietnamese saw about 300 responses and interviews were conducted in person and on the phone with 28 more stakeholders.

Why Stockton Boulevard?
Between 2009 and 2018, 266 people lost their lives in crashes on Sacramento streets. To address this public health and community crisis, the City of Sacramento developed and then adopted a Vision Zero Action Plan (2018). Through that effort, staff identified the High Injury Network – 14% of the streets that account for 79% of fatal and severe injury crashes. Further, staff identified the top 5 one-mile segments with the highest rate of fatal and severe injury crashes. Stockton Boulevard has two of the five segments. The project team is focused on improving safety for all roadway users on the former Highway 99.

Many eyes are on Stockton Boulevard with multiple development interests. Aggie Square, the UC Davis expansion, is expected to add jobs and housing units which will certainly have an impact on the corridor. Finding a way to move more people in a fixed amount of space will be central to the Corridor Study recommendations. Sustainable transportation, like transit, walking, and bicycling, must be a convenient and reliable option. City staff is also coordinating with Sacramento Regional Transit staff as they study ways to improve bus service along the corridor by increasing frequency and reliability while decreasing delay along the routes.

How the public responded:
After 292 online survey responses and 358 surveys taken while riding transit along Stockton Boulevard, the project team summarized the following themes:

Corridor Study Timelines and Costs:
The project team is developing three alternatives to share with the public beginning in February 2020 and solicit feedback through an online survey and various public meetings. The feedback will determine a preferred alternative, after which cost estimates and final recommendations will be taken to City Council in the summer for final adoption. Besides basic maintenance and pothole repairs funded by gas tax dollars, the city does not have funding for transportation projects such as this. Therefore, once the plan is adopted, city staff will begin applying for competitive grant funding to design and construct changes. The public can expect to see some low-cost, short-term changes around 2022, with larger projects that will follow years into the future.

Posted at 09:38 AM in Gold Country, Omni-Local | Permalink