« California is the Color of Autumn | Main | Casino Lotus:  During the pandemic, patron safety is top priority »

For the love of food and memories attached to that love 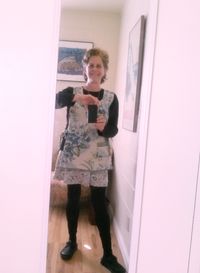 The idea for this story has been brewing for some time. Today, on the feast of Thanksgiving, it seemed like the perfect moment to begin. Preparing traditional dishes — learned from my parents and grandparents — the memories and the love of cooking was instilled long ago. The reminders filling my kitchen temple. Not just the recipes or skills passed from generation to generation, but those treasured implements handed down as well,

Not well-schooled at the art of "selfisims", I managed to capture this photo. This reversible apron — tied at the waist and reminiscent of an art smock — belonged to my mother-in-law Wallie Holmes. OMG could she cook! Loving every minute and every smile she brought to family and friends. I always looked forward to those holiday and family feasts. I only own two other aprons both connected to her memory, one frilly hostess-type and another she handmade for me. They hold special places in my cooking wardrobe. I won't dress in any others. 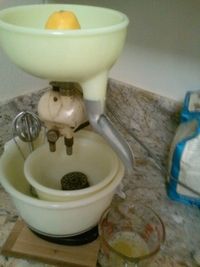 Josephine (Jo to everyone who knew her and my father-in-law's mother) was my neighbor and friend after I moved next door in 1987. We spent summer evenings on her front porch where she would share stories about Sacramento's past along with pizza and soda -- her choice! She fed my cat, Domino, who literally knocked on her screen door to be let in for snacks. In the early 1990s, Jo passed away at the blessed age of 94. Among her many prized possessions, I inherited some depression glass plates, two old potato mashers, and, the gem of all gems, the Hamilton Beach Model "D" mixer, blender, juicer, meat grinder circa 1937. All pieces intact including the original bowls and juicer. Score! The only part I ever replaced was the cracked and dangerous electrical cord.

This holiday season, two batches of cornbread ingredients were mixed and blended in these bowls. Fresh mandarins and Meyer lemons were easily juiced and transformed into salad dressing. State-of-the-art back in the '30s, this behemoth will outlive, outlast all comers. Replacing it is out of the question. While I sometime o-o-o-oh and a-h-h-h-h over slicker, newer models, this HB M"D" is a loving reminder of those who have blended and cooked before me and will be with me to the end. No drama here, but 'she' will likely outlive us all. 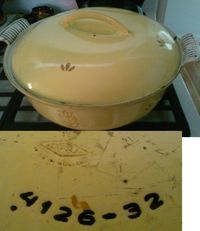 Sautéing, simmering, and mixing were very much part of this loving food process which included my father's Dru Enamel Cookware Dutch Oven #4126-32. Vintage? Yes, absolutely. No longer manufactured, but available online. As far back as the '70s, I remember this dear friend. My father's absolute "go-to" for his world-famous Sloppy Joes (weigh-in if you ever had the pleasure to enjoy them)!  Or his beef brisket a Chanukah favorite alongside his latkes. I have recipes for both, but fear of falling short has kept me from ever attempting either.

This Dutch oven was his faithful companion until my father passed away in 2005. There was little discussion among siblings as to where the Tulip DRU would go to live. It has served me well these 10-plus years. For Thanksgiving, cornbread stuffing was assembled and mixed. To save time washing, I used it to toss salad greens before putting them in their appropriate glass bowl. Have I cherished this culinary heirloom? Yes, 1,000 times yes! Soups, casseroles, and stews have started and finished here. Not one meal or creation has passed without remembering with deep love, and sometimes tears, my father's love for cooking. Food was his way of showing love -- as is often the case. He was masterful in the kitchen. Both parents were skilled chefs, but Dad really sparked my own love for cooking. Generations past would bequeath such treasures. And, yes, my own living trust must deliver this old family friend to another generation.  The question remains, "Who?" 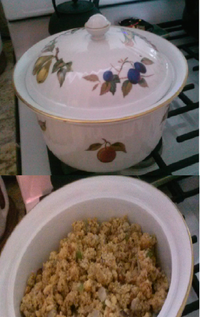 On my first journey to England, I fell in love with Royal Worcester Evesham Gold. I was just 17 years old; I think the writing was already on the wall. Shortly after, my mother began buying and collecting the same china with a vengeance. Stubborn 20-something, I decided to go another direction though I still had a hankering for Evesham. When mom passed away in 1991, she left behind dozens of pieces of this china including plates, bowls, tea cups and saucers, and many serving pieces. With little storage in my bungalow, it was necessary to sell most of the china. I really didn't want or need much of her collection, but still loved the pattern's simple elegance and the memories of England.

Naturally, the reminders of her were/are very strong. Whenever Evesham graces my stove, oven or table the come memories flooding  back. This two-piece casserole was front and center this Thanksgiving. Made-from-scratch, my cornbread stuffing was elegantly framed. This "for the love of food" memory had double meaning given that I learned the fine art of cornbread stuffing from my mother. Like so many recipes handed down, there's nothing in writing for this family favorite. The cornbread recipe is courtesy of Moosewood Cookbook, but the stuffing itself is all mom; though I have tweaked it over the years. This year I wasn't able to get the much savored fresh chestnuts, but the final product wasn't lacking. Taste buds were dancing. I know my mother was smiling. She nourished my cooking DNA and while we didn't always agree, I am still my mother's daughter!

So, this ends round one of "for the love of cooking". I hope in time, other memorable items will come to life as they touch me at every morsel of my soul. I know there are many people out there sharing the same memories. Please do!