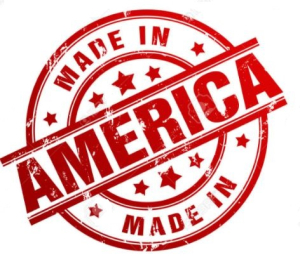 Yes, Made in America has been a mantra. Embraced by many. Now, more than ever, it should be embraced by all Americans. During the pandemic, we could clearly see how out-sourcing nearly all of our manufacturing put us at an economic disadvantage. Many everyday items - appliances, electronics, parts - were unavailable or taking many weeks or months to arrive. This was not the case pre-COVID. 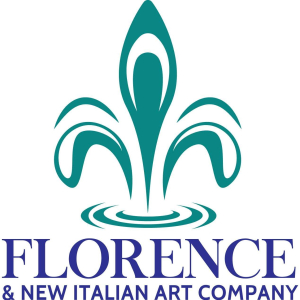 So, when I decided to buy a new garden birdbath I would have nothing other than "Made in America". Thanks to online searches, I quickly located Florence & New Art Company. Imagine my delight and doing a joyful dance!

Family-owned and operated for decades, the original Florence Art Company was founded in 1916 by Tuscan artisans living in San Francisco. A leading San Francisco statuary manufacturer established in the 1920s, New Italian Art Company, bought Florence in 1950 and the next generation of garden art began. One of the West Coast's premier manufactures of garden décor, Florence & New Italian Art Company hand-casts a wide variety of fountains, birdbaths, containers, and assorted garden accents. 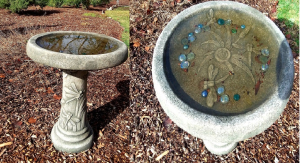 I immediately called the Hayward-based company. Yes, they were still making birdbaths. And incredibly, my local Ace Hardware of Chico was one of their distributors. Just two tiny glitches.  (1) Ace Hardware was out of the hummingbird birdbath I was seeking. (2) COVID! In the early days of the pandemic, Florence & New Italian Art Company was not considered essential and had to close down for several weeks. By the time they re-opened, they were many weeks behind in manufacturing.  The ups and downs of being a small, locally-owned, operated and Made in America company. Sigh.

I would not be deterred, the birdbath was ordered and the waiting began. Tick tock. The days and then weeks slipped by. Every so often I would call to confirm. "Yes, we have your order." The promise was always "soon". Months passed.

Then, sometime in November the call finally came. My birdbath was in on truck and on its way from Hayward to Chico. The long wait was over. I could hardly contain my joy. Now mind you, I had never actually seen this birdbath. I was hoping against all hope that it would be everything my garden and bathing birds would love.

And it is! The proof is in the splashing.