Yes, they’re open! At long last! During the early days of the pandemic, Long Island Ice Cream was social distancing with ice cream lovers. Then in autumn 2020, an arson fire at Tirapelli Plaza shuttered all the businesses including Long Island Ice Cream. On April 23, 2021, they happily reopened providing full service, welcoming the community of supporters but still requiring masks and social distancing. Nothing is sweeter than a little ice cream – except lots of ice cream. Is there a milkshake favorite? Some days are a Rocky Road and some days are Cookies ‘n Cream.

When Ken acquired Long Island Ice Cream (LIIC), it needed lots of TLC. Opened in the ‘70s, the one-time Baskin-Robbins passed through various owners until Ken took over in 2009. The then owners, originally from Vietnam, had chosen the name Long Island in honor of a famous island in the Mekong Delta. Ken decided to preserve the name and goodwill with locals. Today, fans of Long Island Ice Cream believe it’s a nod to New York, a valid assumption.

“First thing I did was infuse money into rehabilitating the store and products. Focusing on quality and attention to detail, Long Island committed to serving the best ice cream from different manufacturers – including the local favorites from Gunther’s Ice Cream! We grew year after year and made a commitment to providing the best customer service,” Ken said.

About 75% of Long Island’s customer base is from outside of the area. With a focus on quality, supporters clearly like what they do. Word of mouth is the best advertising in a world where social media reigns. “We make some of the best milkshakes in the area! We hear this again and again and that ‘friends 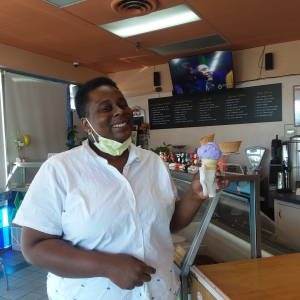 recommended’ LIIC. The milkshakes and smoothies are fully customizable. We don’t use any syrups and use higher butterfat content ice creams and milk – the key to a great shake. Adding fresh fruits makes it even better!”

Yes, LIIC also does fresh-brewed coffee drinks – nothing is pre-brewed and everything is made to order. Just like ice cream, coffee drinkers are very specific so Ken caters to their penchants carrying Pete’s, Starbucks, and (Sacramento’s own) Temple. The difference between coffee cremas (the flavorful, aromatic, reddish-brown froth that rests on top of a shot of Espresso) is noticeable and coffee drinkers have a preference. “Think coffee milkshake! Try fining this anywhere else – we grind, brew, and chill the coffee before blending it into mouthwatering ice cream. I strive for perfection and have learned that people are willing to travel for that ‘perfect’ confection or beverage.”

At the onset of Covid-19, LIIC immediately modified their service. They installed an electronic lock to control the number of people in the store; added extra staff and took orders outdoors, but this has all changed as restrictions have eased.

“We actually grew during that time because we changed the way we did business and helped new and returning customers who were concerned. It’s still been challenging but we’ve been very lucky for all the people who have supported us. Going into March it was scary and we saw a little downturn, worrying it might be the end for us. Every crisis can be weathered with cash reserve; fortunately, we received a small PPP loan and disaster aid through SBA. When you have employees counting on you, it was a huge relief.”

“Even though business life on Stockton Boulevard has been tough, we have a good clientele base and I have a good location. The cost-benefit is that rents are affordable. For starting a small business, it’s economically viable. It was a good decision to come here and I try to build relationships. What better way to make people happy then to make them a delicious treat and see them smile and say. ‘That’s why I’m back again!’ That’s the enjoyment.'

Born in Oak Park, Ken still lives in the neighborhood where he was raised. Joining the Navy right out of high school, he traveled the world before returning to Sacramento to help his mother. Ken has worked at UC Davis Medical Center interpreting heart rhythms for 20 years – the ice cream parlor is a ‘side gig’. “It’s been a great 11 years and I’ve met so many good people. Nothing like the feeling when someone tells you, ‘That was perfect!’ You feel like you’re doing something right.”