California's Redwood Coast: Now I lay me down to sleep at Inn at 2nd & C 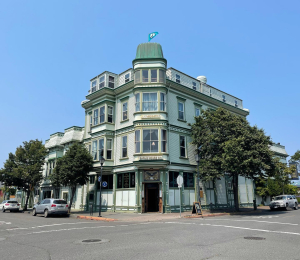 Road trip! The beginning of this extended journey we headed out for Eureka, California. It had been many years since my last visit and was excited to retrace my steps and road warrior miles.

The Inn at 2nd & C was a wonderful start to our 17-day road trip. So glad we landed here our first night on the road. Thank you to manager Geoffrey, and greeter dog Max whom we loved. Good news: The hotel is dog-friendly on the first three floors! Great location to walk to good food, art, and retail. Lunch at Vista del Mar just a few blocks away we shared fish & chips and cold beers. Definitely a locals place. That night, we drove over to Jetty Samoa for drinks alfresco and then dinner at Café  Marina and Woodley's Bar - revisiting all my haunts from years ago. Everything close to or at the water's edge. And an easy walk or drive from the Inn.  The next morning we gleefully found our way to Los Bagels another longtime local in the region. Let me just say - BEST BAGELS ever. And organic!!! The Inn does provide a wonderful continental breakfast in the lobby area. 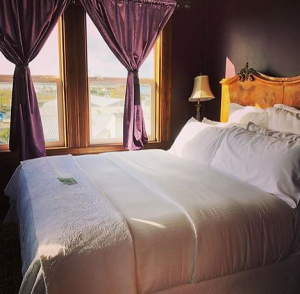 Our king suite at the Inn was so comfy and quiet. Wonderful linens and towels make such a big difference. Big windows and lots of light. No coffeemakers in the rooms but an easy trip to the lobby first thing in the morning to bring our caffeine brew to our room. Also, met one of the housekeeping staff - forgive me forgetting her name - she was just incredible. The restaurant was closed the night we stayed. Hope to enjoy that on our return. Public spaces on every floor were so welcoming. Books, board games, and puzzles - plenty to keep friends and families occupied day and night.

The Humboldt County Visitors Bureau has just relocated down the street. If you need any guidance for places to go in the region - check them out at 422 1st St, Eureka, CA 95501.

Next time more than one night in Eureka!

PS - Was bothered to see that some reviewers dinged the Inn because of social issues in the area - saying it was dangerous or unsafe.  We never felt unsafe!

I have been exploring and writing about California for more than 30 years. I also administer a wildlife and nature tourism program. You can trust I am credible and have no axe to grind. While they are sometimes listed as a Foundation, their website and other social media clearly list them as the Barry Kirshner Wildlife Sanctuary. Nothing could be further from the truth. We visited as a group of four adults and all of us were horrified by what we saw.

The Cambridge Dictionary describes sanctuary (noun sanc·​tu·​ary | \ saŋ(k)-ch-wer-ē) "a place where birds or animals can live and be protected, especially from being hunted or dangerous conditions: a wildlife/bird sanctuary".

While you may find stories online painting this roadside zoo in a positive light, you only have to visit to see why there's nothing positive going on here. Most of the animals live in small, tarp-covered enclosures. I can't imagine the heat during our long hot summers. Or what they've endured during the many years of intense fires. They have few if any amenities to keep them occupied or water features other then small plastic pools. Animals are overweight either from lack of exercise or poor diets.

I have spent uncounted hours contacting local, state and federal agencies about this facility. Asking why it's still in business. The state California Department of Fish and Wildlife says that the "zoo" meets the minimum required by law. Those state regulations are decades old and those minimums are seriously lacking. When we asked about the enclosures (more like prison cells) and the lack of amenities to keep the wildlife active, even the Kirshner staff said that they "exceed the minimum required" for what they provide. Yes, the bare minimum. This complex is not rated by the zoological society or the American Sanctuary Association. They are listed as a non-profit but aren't rated by Charity Navigator or similar organizations. I filed a complaint with USDA through their APHIS (Animal and Plant Health Inspection Service) and despite the fact that other complaints have been filed by other organizations they are still legally permitted. And they have been cited multiple times by the USDA. As a non-profit they are also supposed to file a Form 990 with IRS. I couldn't find anything to indicate that they are current with this filing.

I have contacted Performing Animal Welfare Society (PAWS), PETA, Butte County Animal Welfare, Butte County Board of Supervisors, and others - I can't even remember. I'm providing all of this to let you know that's how upsetting it was to me and the need to let others know. Trying to find away to shut this place down and get these poor creatures to a safe and loving environment.

The owner, Roberta Kirshner, has endless explanations about how and why none of what I am (others are) saying isn't true. You only have to visit to see the truth. I would never visit this place again or suggest that anyone go there for any reason except to see the deplorable conditions and try to help shut them down. I will continue to pursue this matter.

November 1, 2021: The USDA cited Kirshner for failing to provide the attending veterinarian with timely and accurate information about animal health and behavior problems. The licensee failed to notify the veterinarian of a coati’s increasing hair loss on the tail, a wound on the animal’s left back leg, and a wolf who was continuously pacing around the enclosure in a stereotypic pattern, wearing a deep track into the ground. Kirshner was also cited for failing to have accurate and complete records available for review and failing to maintain the required effective height of the perimeter fence surrounding the larger carnivores. Several items were adjacent to or leaning up against the fence, decreasing the effective height of the fence.

August 13, 2021: Cal/OSHA issued Kirshner a citation for a serious violation of workplace safety regulations after a clouded leopard attacked a volunteer. A Cal/OSHA narrative summary of the attack explained that the leopard had jumped on the volunteer after she fell down and started biting her around the neck, which caused injuries that required hospitalization. Kirshner was ultimately required to pay a penalty of $1,800.

Here are links to some other stories: