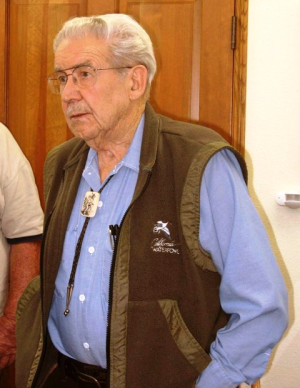 In 2006, it was a great pleasure to meet Carroll Thomas as he celebrated the opening of his Big Pine art gallery. What’s the big deal you may be asking yourself?  Well, Carroll had also just blown-out the candles (figuratively speaking) on his 96th birthday. The wide-eyed response to both amazing feats was, "No! Way!" He was the spriest 96-year-old I had ever met, "C'mon now. You can't be a day over 80!"

It was awe-inspiring to bask in the artistic glow of this true California treasure.

It’s appropriate that he should be living and working along side the oldest living things on Earth...the ancient bristlecone pines, which he captured on canvas as a sprightly 96-year-old. California is blessed to have so many of the oldest, tallest, only-est, largest things on the planet. Including, of course, Carroll.  He is the oldest living American painter, still creating works of art, while personally operating and maintaining his own gallery.

As he approaches his 100th birthday, the time to celebrate and honor this California classic really is now. Carroll’s had a few health issues the past year. However, he still paints almost every day. Quite a feat since he started painting as a nimble nine-year-old. 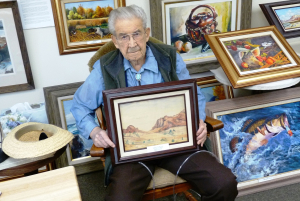 Carroll has been painting landscapes and wildlife most of his life; well, at least 90 years of it! The first painting he ever created still hangs in his studio in Big Pine, California. In 1928, he attended the School of Fine Arts in Minneapolis. Times were hard -- that pesky old Depression – and, in his late teens/early ‘20s, he hopped a freight train from Colorado to find work in California.  He lived in the Sierra Nevada with a friend where they hunted and fished to feed themselves.

His first gallery - which he opened in 1978 -- was near Lake Tahoe. This lasted a few years before he began traveling and searching for a place to really "settle down." That place eventually was Big Pine. Carroll had been traveling his whole life -- painting the beautiful landscapes and wildlife images that hang in his gallery today. 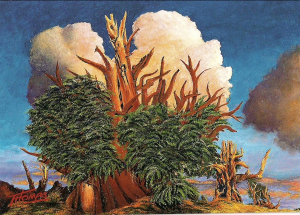 His work evolved from watercolors to oils. Personally, I prefer the soft, liquid feeling of the watercolors, but Carroll explained that oil painting is more practical. Oils or watercolors, there is an unmistakable love of nature and wild places. Carroll’s affinity for the natural world was born during his childhood living in Colorado near the Garden of the Gods and views of Pike’s Peak. “It was so beautiful – big red rocks – it felt like a cathedral looking out at Pike’s Peak,” Carroll said.

His father hired an English water-colorist, Mrs. Sawin, to work with the young Carroll every Saturday for three years.  However, it was San Francisco water-colorist, Maurice Logan, who became Carroll’s guiding light. “He didn’t have time to teach me, but every Saturday he would loan me two of his paintings to study. He charged me $20, but it advanced my work about 10 years!” 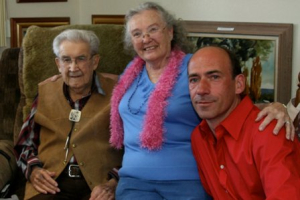 Carroll loved to travel and was an avid outdoorsman. Every trip was a painting trip, but had to include hunting and fishing. His old camper and trailer took him all over the world including the Arctic, Alaska, Mexico and Central America. But the experience of a lifetime came during a 3-1/2 month trip when he hiked 430 miles of Sierra Nevada trails. “When I was hiking, I would do a watercolor a day,” he said.

The walls of Carroll’s gallery are lined with the labors of his love – mountains, valleys, wildlife, seascapes – and at 99+ years, the love affair continues.  The other great love affair he maintains is with his partner of more than 40 years, Helen. They work side-by-side in the gallery nearly every day.

In 2008, I specifically journeyed down this favorite stretch of Hwy. 395 to deliver belated birthday greetings for his 98th birthday. Last April, family and friends gathered to mark his 99th birthday.  I called-in my greetings from Sacramento.  Despite the 300 miles, I gave serious consideration to attending that auspicious occasion.

A message to Carroll on his 99th birthday from his son says, “We want you to know that we cherish all the great adventures we’ve experienced together. You are the living legend!” I must agree.

In April 2010, come Hell or high water, I will be there to watch Carroll blow out his centennial birthday candles.